Read Margaret Webster's reflective piece, who is currently interning in India through the Child Family Health International (CFHI) India: Healthcare Rotations,  as  she talks about the obstacles she sees, as well as the motivation she gets from interning in another country. 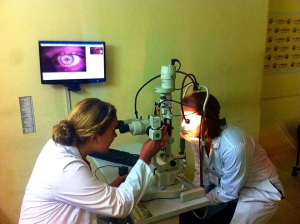 Natali, Nicole, and I took a trip to the Taj Mahal and Jaipur during our first weekend in India. Even though it was cloudy, the Taj Mahal was more spectacular than I thought it would be. Jaipur was filled with magnificent forts and palaces. The weekend involved a lot of driving, but it was worth every second. India is filled with so much culture and history, and we are very lucky that the program gives us the freedom to travel on the weekends.

The ICTC (Integrated Counseling and Treatment Center) was the first rotation of the week. The ICTC is an organization that focuses on providing clean needles, counseling, and Oral Substitution Therapy (OST) for intravenous drug users. HIV/AIDS is a large problem in India, and this program is focused on decreasing the spread of the disease between drug users. The ICTC’s main goal is not to eliminate drug use or make a person “clean”. They want to educate the IV drug user population on the safe way to inject and the importance of using clean needles to decrease the spread of disease. The Oral Substitution Therapy is a program that gives addicts an oral dose of opiates, enough to supply their addiction without the need to inject. People are not pressured to switch to the OST, but when they make the decision to stop injecting; this program is there to help them.

Most of the people who use the center live on the street or in the yard adjacent to the facility. We visited the yard, spoke to some of the addicts, and witnessed lots of injections in all different parts of the body. It was shocking to learn that some of the men have been living there for more than 15 years. One man has been living in the yard for 25 years and has been homeless from the age of 6. When he was younger, his father’s mistress was abusing him, so he ran away from home and jumped on a train to Delhi. He spent a few years on the streets, but when he wanted to return home he could not remember where home was. He tried to find the train station where he initially boarded the train but was never able to. He says that the street life is a hard one, but it is the only life he knows. He also says that hunger is his number one problem, because the money he gets goes towards buying drugs.

This ICTC program has been successful in achieving its goal until recently. They have not received funding for the past seven months. This means that there is no money for salaries and no money for medical supplies. Because of the lack of funding, they can no longer supply clean needles to the clients or provide OST to all of the people who are relying on it. This means that the drug users are back to sharing needles. The week we were there, they only had enough medication to give everyone half of their usual dose of opiates. The staff is worried that if they don’t get funding soon they will have to shut down the program because they can’t work without pay for much longer, and they will have nothing to give the patients. I hope that they get funding soon because they have made a dramatic difference in the drug user community.

Sticking with the drug theme, our next NGO worked with adolescent users. The Society for Promotion and Youth Masses (SPYM) provides a three-month detox program for young men who are addicted to drugs. They undergo three weeks of physical detox, receive counseling, attend educational classes, and are provided vocational training. The goal is to help these boys/men, who would otherwise end up on the street, become a contributing member to society. Just like the other projects, there is a lack of funding, which limits the amount of time a boy can stay in the program. If the directors could have their way, they would keep them in the program longer because three months is really not long enough to completely change someone’s behavior. Right now, they have a 50% success rate of boys leaving the street and drug lifestyle. My guess would be that, if they had the funding to keep the boys for a longer amount of time, the success rate would go up.

This organization also gets a large amount of guys that are affiliated with gangs. It reminded me of my time with the school in South Africa. Although we are in a different country, the influence of sex, drugs, gangs, and violence on at risk youth are very similar. Luckily, there are great organizations out there to show these young men that through education, and a desire and determination to change, they can overcome their situations and hopefully make a better life for themselves. Of course, not everyone has the motivation to change and that is just an unfortunate fact. However, the success stories from this organization, and many more like it, are pretty awesome to hear about.