My overall experience with the Townsville Cultural Festival was beyond words, but I’m going to... 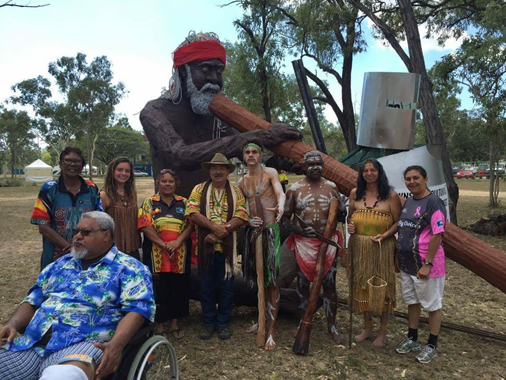 My overall experience with the Townsville Cultural Festival was beyond words, but I’m going to try to put it into perspective here. The people I met, the skills I learned, and the overall love it filled my heart with, all contributed significantly to my time in Australia. Coming to Australia, one of my biggest goals was to get involved with as much as I could around James Cook University and the surrounding community of Townsville. It was also to make some strong connections with the people I encountered. Soon after arriving to town, I saw signs for the Townsville Cultural Festival and within my first week spoke to some representatives of the festival. I knew immediately it was something I wanted to be a part of. They were so kind and I could really feel that they were there to help get people involved and experience such an amazing event as much as they were there looking to recruit help. I could see how much they wanted to make this event the biggest and best it’s ever been, but they needed helping hands.

I began by helping with the bamboo building of an art maze, with a powerful and diverse crew of artists, performers, and activists of social change, all hoping to create an alternate reality for visitors of the festival. This was where I first connected with all the lovely souls behind the event. I spent time with Farvardin Daliri; father, creator, and believer of the Cultural Fest. We worked on some giant sculptures that were new to this year’s event, one of Slim Dusty, Australian country singer, and the other of King Bundawaal, aboriginal legend. For Slim, I helped create his body using only bamboo. For the King, we made a giant wig. Meeting Farvardin was never less of spectacular. Being the incredible artist that he is, he builds sculptures for events all over Queensland. He talked me through the steps he takes to create fascinating and real life sculptures and then put me to work to help him accomplish what he had in mind. He was so grateful for everything, even the smallest things I did. Farvardin really showed me how much you can do with a small dream. This was the 20th year of the festival, and it was growing. He cooked us delicious meals of curry and vegetables as a thank you at the end of the each day. It felt like I was helping family. He treated me like family.

The next week I returned to the site to help again with the art maze. Instead, I got swept away by another lovely lady to help with her garden. Ella has a degree in permaculture and had a very large impact on me. We told stories about different environmental projects we’ve each been a part of where we live, and she told me about her travels in America. It was so gratifying to hear stories about people’s travels. Bouncing experiences off of one another gave me ideas of where to go in the world and ways to make a difference while I’m there. 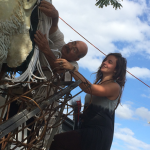 Celebrating unity in diversity, these are the words being the cultural festival and the words that everyone involved with believed in. Everyone was open to ideas and opinions on the construction of the festival site and as we worked and threw ideas at one another. But the conversations weren’t ever limited to the festival; we talked about who were all were, where we all came from and where we wanted to go in life. I felt like, after being in Australia for already three weeks, I was finally around people who really understood me and were pulling me into their community. I made a point to go to the site whenever possible, to help and continue connecting with these people. They told me about other festivals I could become involved with (the largest of which I have already received a volunteer position for) and invited me to meet them places during my travels.

This whole experience really opened up my heart and mind, and I’m grateful it was at the beginning of my trip. It quickly helped me realize that by helping others, I was also helping myself. It made me not want to stop these small acts of kindness, giving as much as I could during my short time in this new environment. I am looking forward to continuing to push my comfort zone, connecting with more lovely souls, getting involved with more cultural events, and learning more about myself during my travels.