Read about Jamie Hollamon's journey through the Ring of Kerry during her internship at the University College Cork in Ireland.

There’s an Art to Life’s Distractions

First to talk about is the way classes are here. It’s very laid back compared to America. We have basically no assignments or anything other than an essay and the final exam. Last week I had two essays due. One was a paper for my Irish History class and the other was an analysis of laws from the 16th century for my Women’s History class. The one for my Women’s History class was pretty easy, but I put it off to the last minute because that’s what I do. #Lazy. The essay for my Irish History was painfully difficult and no fun at all. I knew nothing about any of the topics and the guidelines were super vague. I hated it and spent 3 days writing. If I don’t get a decent grade on it I’ll be so mad. It’s all over now and I only have one more essay left of the term and then it’s all just exams. 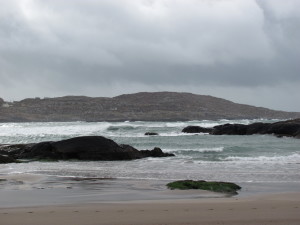 More excitingly to talk about is the Ring of Kerry trip I went on last weekend. It was awesome!

We stayed in the town of Cahersiveen in Co. Kerry and we then toured the Ring of Kerry. Friday we went to some underground caves that were cool but also a bit creepy. The caves were so far below the ground that the temperature is always 55 degrees. The tour of the caves was basically a bunch of geology information but it was cool to be down there. Later that night we learned some traditional Irish dances. It was super fun and probably the highlight of the weekend, (other than the amazing food we ate).

The next day we explored Valentia Island. We went to where the first trans-Atlantic cable was laid, which just looked like a bunch of cliffs to me.

After that we visited a dairy farm and went for a short hike to the Fogher Cliffs.

Then we went to a stone fort and an old castle. The castle was my favorite place we visited. I got to climb all over it and they filmed a few scenes from Leap Year there, which is one of my favorite movies.

We went to the beach in Derrynane. It was overcast but beautiful, much like the Oregon coast. I’ve decided that I want a vacation home there. The views were stunning and the town was tiny and adorable. I can just imagine spending my summers by the beach or golfing away at the course in neighboring Waterville or going on drives on the weekends to pass the time. It’s my new life goal to have a summer home by the beach in Kerry. I mean look at these views!! It’s beautifully irresistible even on a bad day!

After that we went to Killarney National Park, which I have no pictures of because I was sick to my stomach and just thankful I was off the bus and on solid ground for 90% of the stops we made. We went to a waterfall, a lookout point, and an old house with a grand garden though. I only have a picture of the waterfall and the lookout point.

My biggest takeaway from the Ring of Kerry trip though is that they have Puffin Penguins in Southern Ireland! The Puffins stop there every year during their migration. I didn’t see any of the Puffins but they had pictures of them all over the place and at Derrynane the guy said Puffin sightings are very common. New life goal is to see a Puffin in the wild/make friends with one.

Other than the trip and midterm essays I don’t remember what I’ve been up to this past month. (More like it’s not as exciting). 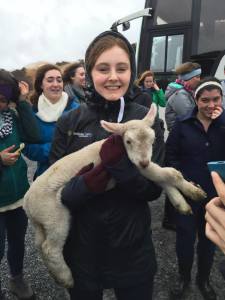 I have been planning a trip to Scotland though that I’m super duper excited about! I went to a lecture event at the beginning of term where they talked about European travel tips for international students and there they talked a lot about doing something for yourself. The speaker’s example was that he loves to ride bikes, so while he was studying abroad he went to see the Tour de France. I thought it was a really awesome idea and a chance to spoil myself. I decided that since I love going to concerts I was going to make a whole trip out of going to a concert in the UK. Long story short, I am going to Glasgow over spring break to see a James Bay concert and make a whole week of it. I booked a fancy hotel for 3 nights. I’m planning on going on a tour of film locations in Scotland (including a castle from the first Harry Potter movie!!!), and I want to book a tour of the west Scottish highlands because that tour goes to the castles. I’m super excited about it and I can’t wait to go. I’m also going to Amsterdam with group of people for the first few days of spring break. Making this spring break the best one EVER!

I’m currently trying to plan a weekend in London for the last weekend of spring break, mostly so I can go to the Harry Potter Studios and see the locations in Sherlock, but I don’t have much money left to travel at the moment/ London is expensive, but we’ll see.

You can read more about Jamie Hollamon’s adventures in Ireland on her blog at https://alltheplaceswecouldbe.wordpress.com/