Read about Diana Eernissee’s piece on making friends and exploring the country of Ecuador as she studies abroad through the IE3 Global USFQ Ecuador program.

The Weekend of Carnaval

I was awarded the IE3 Global Scholarship in order to help me with my semester abroad in Quito, Ecuador. I chose Quito because I wanted to continue improving my Spanish, while being exposed to a completely new culture in South America, somewhere I have only dreamed of going. I’ve learned that this program and Ecuador in general are capable of so many things! In geographical context alone, I can travel to so many different areas including the beach, the Amazon, the sierra, the desert and so much more in a short period of time. Although I’m only nearing the two month mark, I can already tell that I’m very happy to have chosen this country and program and am beyond lucky that I still have another two and a half months left in this beautiful city with new friends.

It was with two of these new friends that I experienced a highlight during my trip this far that I will never forget. Upon arriving to my university here in Quito, at orientation they jokingly announced when the next vacation days were before even starting the first day of school. I assumed they wanted us to be excited for our days off so we could go out and explore. I asked my host parents about the upcoming holiday and they told me all about the vacation called Carnaval that was to happen on Friday to Tuesday in early February. It was explained to me that here in Ecuador, Carnaval is celebrated by splashing water, flour, dye, and eggs on everyone around the streets. To me, it sounded more than fun to be able to spend five days getting wet and dirty wherever you go, in a manner of celebrating. I was told that here in the city it’s not quite as common since there are too many people and not enough water. So when two of my local friends that I had met in one of my classes in the first week invited me to come with them to one of their hometowns, I was more than overjoyed. She said that we would be leaving Friday after classes in the evening to avoid traffic. After about a two and a half hour drive, we arrived to my friend Alexandra’s parent’s house. The three of us girls stayed in her childhood room, which was more than entertaining to see all her childhood posters and memories that she had all around her  room. 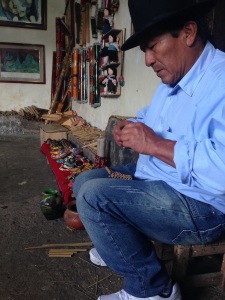 The following day, Saturday, Alexandra showed Andrea (my second friend) and I around her hometown and introduced us to some of her friends that had either stayed to study or returned home for the holidays. It was so fun to completely immerse myself in this smaller town with local friends. I had no other friends from my exchange program with me, so I was on my own as far as adapting and trying to fit in. But with that being said, everybody was so happy and welcoming to have me part of the group. Some of the friends had just met me less than an hour before and were already making me feel like I had known them forever. It was amazing.

From there, on Sunday we went to Alexandra’s grandparent’s house in the next town over, a town even smaller than the one she was from. On this day we reunited with fifty family members and friends, spending the whole day on the streets, with what felt like the entire city. Everyone got together to watch the parade and to throw water, foam, eggs, flour, paint and anything else we could find on anyone and everyone. It was an experience that was so memorable that I will forever cherish. Without having known these girls and being fortunate enough to have them take me with them on their vacation, I would had never been able to meet the wonderful people nor experience two cities/pueblos outside of Quito.

Carnaval continued up until the moment we left Tuesday night from Alexandra’s parent’s house to return home from Quito. It was so sad during the drive home. We all wanted to turn around and repeat the amazing weekend we had celebrated together with friends and family. Carnaval was an amazing highlight that I still think about to this day. 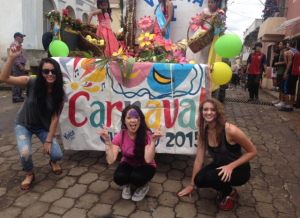 Since then, I’ve spent almost every weekend with Alexandra and Andrea exploring parts of Quito and around Quito as part of their local friend group. Our next trip is for Semana Santa in April when we plan to go to the coast, and I cannot wait! I would highly recommend if you’re thinking about studying abroad to meet locals and try to step out of your comfort zone. It can be more than difficult when you’re exposed to a completely new culture and customs but what I’ve taken out of my experience thus far, is that getting to know locals is one of the best things that can happen during your time abroad. So many people are here to help you explore and experience new places and traditions. If you’re anything like me, then you prefer getting to know small local towns and local hangouts rather than the more touristy, internationally known places. Of course I also enjoy visiting those places too, but for me there is nothing better than getting to go somewhere with locals where you can learn and experience so much more of the culture!