About six years ago I made it a life goal to someday travel to Africa....

The End of One Journey, and the Beginning of the Next 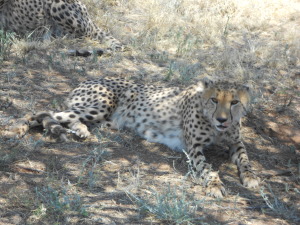 About six years ago I made it a life goal to someday travel to Africa. I had dreamed up some fantastical expectations for what my grand exotic adventure would be like, but I didn’t have a realistic idea of what I would actually be doing in Africa. During my first visit to Oregon State (before I was even a student), I was given an IE3 Global pamphlet with an excerpt on the Cheetah Conservation Fund. At last my golden opportunity had arrived! Now I knew what I could be doing in Africa and had a solid goal to strive for. After saving money, applying, waiting, hoping, doubting, getting accepted, getting excited, preparing, stressing, and finally travelling, it’s suddenly all over.

Four weeks have passed since my return from Namibia, and the ten weeks that I stayed there felt like they never actually happened. Despite initially feeling like an outsider at CCF, I eventually got the swing of my work and projects (which had previously intimidated me and my lack of experience). I had also acquainted myself with all of the staff and interns. Around the fourth or fifth week, I was starting to feel at home in the rugged Namibian landscape, almost as if I had been living and working there for my entire life. When the eighth week suddenly arrived, I realized how fast everything had gone by, which was unusual since my first few stressful weeks seemed to drag on far longer than they should have. I knew I would be heading home soon, and was feeling bittersweet about it. I was excited to go home and tell my friends and family about my stories at CCF, yet at the same time, I would be leaving behind those very stories and all of the people that I had met. In fact, I was honestly a bit depressed when I arrived back in America. I find myself thinking about or mentioning CCF at least once a day in some way, shape, or form. I’ve also been thinking about my future career. While I cannot say I know for sure what I want to pursue, CCF has helped me think more about the possibilities. 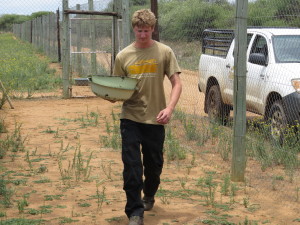 I’ve always been interested in hands-on work with animals, but I gained experience in new skills that I previously never considered (such as tracking, data administration, and counting game). Additionally, I improved some of my previously acquired skills, such as animal care and giving educational talks. CCF had its own unique little culture comprised of an assortment of international folk. While these individuals came from fairly different backgrounds, whether it be culturally or professionally, their combined work was ultimately for the conservation of the cheetah. However, I was not permanently fixated at CCF’s headquarters for the entirety of my stay. Around my seventh week, five other interns and I travelled to Etosha National Park for a three day safari. We camped out by waterholes and saw the megafauna Africa is known for (elephants, lions, huge herds of game, the whole shebang).

Before attending OSU, I had vividly imagined what my trip would be like through the African savannah, and how perfect everything would be. While my internship in Namibia didn’t match my original and practically romanticized vision, it was for the better. Through my first trials and tribulations at CCF, I learned about myself, my field of study, and the stories of different people and their connections to conservation and the cheetah. I may be home and back to my regular life, but these experiences have cozily nestled themselves into my memory. This adventure is over, but there will be many more to come. And as before: I must continue!