Read about Adrian Engstrom reflect on teaching and the outside cultural influences that impact Nepal, as he interns through the Trek to Teach program. 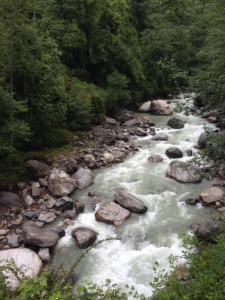 The school in Ghandruk was closed for a week after the earthquake as the government declared a time of mourning. Nepali people in the entire region left for Pokhara and Kathmandu to check on their families. Kathmandu was hit very hard, but Pokhara wasn’t, and most of the people who live in this district – named Kaski – returned by Sunday, the start of their week. Monday was the holiday of Buddha’s birthday, so on Tuesday I started teaching with my friend Catherine.

My god, it was rough. The kids just never stop being energetic. We found some ways to work with their energy to get teaching done, but eventually we’ll run out of games. The last week has been fully occupied with lesson planning, teaching and frantic improvisation when our teaching goes wrong, troubleshooting lesson plans, and feelings of exhaustion . I’ve managed to learn a few new words of Nepali in that time but I still don’t have enough to communicate well.

I have been able to pick up on some themes in Nepal’s international relations, though, and they’re very interesting. Nepal is small, not very populous, and not very rich, and in many ways is subject to the whims of its larger and more powerful neighbors. China cannot exert much influence on the country without crossing the Himalayas, but only the low-lying flat fertile plain of the Terai is on the border between India and Nepal. Most of Nepal’s trade is with India, and it’s conducted at a serious deficit to Nepal. They export raw materials to and import manufactured goods from their more-industrialized neighbor. Many Indian people live in Kathmandu and work as sellers of flutes and boardgames on the streets (in conversations with these people, who fleeced me a few times and tried to fleece me many more, I asked them where they were from); it seems that migration is popular because Kathmandu is more of a tourist center than northern India. It’s difficult to separate fact from fiction regarding this whole affair as my primary source on the situation is from Nepali people. However, they claim that India has a military base in Nepal, that Nepali people produce deforestation by cutting down trees in the Terai and floating them downriver to sell in India, that Indian people migrate north to settle land in the Terai which should belong to Nepali people, that disabled Indian people are dropped at the border to beg in Nepal where their chances are better, and that most homeless people and beggars in Nepal are Indian. Some of these themes remind me of the American dialogues on immigration: specifics vary, universals remain universal. On another note, there are credible reports that the Indian government built a site in which they claim Buddha was born, instead of Nepal’s Lumbini.

Whatever of this is true, it certainly feels that Nepal is culturally marginal. My host family watches a lot of television and the action movies, soap operas, and comedy shows are all in Hindi (and quite intelligible to me from context alone). These programs are set in India and deal with Indian issues, like inheritance schemes and crimes of passion, the origin of strife between India and Pakistan, and the old-west style defense of towns from bandits. Modern television shows’ dialogue is interspersed with short English phrases (over dramatic soundtrack Doctor says 30 seconds of lightning-fast Hindi and then “there’s nothing I can do”; patient burbles 15 seconds of halting Hindi and then “tell my family maim unhem pyara karata hum”), so the penetration of Indian culture by America seems extensive. I’ve previously mentioned Nepalis’ love of American music, but I should also mention that a central area of town bears the moniker “freak street” because, according to some locals, in the 1960s and 1970s Americans would do drugs there and “freak out”. Regardless of the veracity of this story, it’s clear that Americans are never far from Nepali minds. 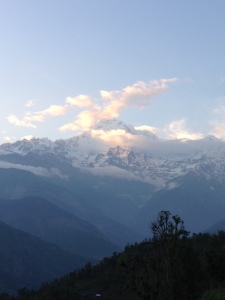 Part of the reason for this is the vital role tourism plays in their economy, in the absence of much other economic activity besides the export of natural resources and agricultural products. A large number of Spanish-speaking, German, Russian, Chinese, Korean, and Japanese people tour the country, and many guides I’ve met have been excellent speakers of one or two languages besides English, and yet English is still the single most valuable foreign language for them to learn here. English in government schools is now compulsory in first grade and onwards, an institutional confirmation of this cultural orientation. And, like the Hindi/English (“Hinglish”?) spoken on Indian television, their language has been changing accordingly: “namaste”’s cousin, “namaskar,” is more formal but almost never heard in daily life because it’s more difficult for foreigners to pronounce.