Britney is studying abroad for a year from Fall 2015 until Spring 2016 at the University of Sheffield in England. She lives and goes to classes in a church and often rides a paternoster.

Sheffield at a Glance

If you grew up in the Northwest of the United States, the first thing you may notice when you arrive (apart from the British driving on the opposite side of the road) is the 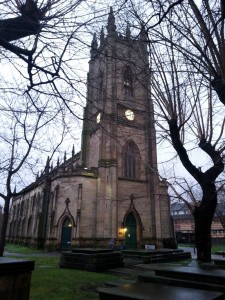 plethora of brick buildings.  The housing exteriors are predominately stone or brick, not panels.  One of my favorite things about the UK is that many of the buildings are very old and are repurposed.  In Sheffield’s case (originally an industrial town, steel industry) many of the buildings are old factories and churches repurposed for the populations’ needs.  Sheffield is rainy, windy, and hilly, just like home (Seattle area)!  You will also find out that there are many British accents, just like there are many US accents, with the exception that it varies by counties/cities rather than states/regions.

The University of Sheffield is a great example of integrating modern and older architecture.  The university is newer in comparison to the renowned universities in England, but its original architecture reflects the architecture of earlier time frames, such as Firth Court (named after one of the 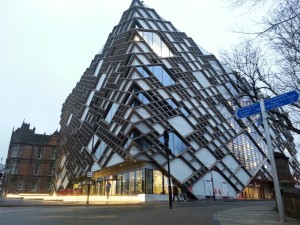 founders).  I live in the heart of the engineering buildings quad.  Yes, I live in a 19th century church, St. George’s.  The nave has been repurposed into a lecture hall and I even have classes there, which is awesome!  Also yes, those are graves.  Many churches in England have graveyards, and St. George’s is no exception.  The church is situated in the center of a graveyard.  On nice days, people like to hang out and eat lunch on the gravestones.  The university has also incorporated more modern architecture.  Located across the street from the main entrance of the church is the new engineering building, the iconic Diamond, which opened in September of 2015 (pictured on the left).  This is a very popular study spot.  Lastly, and my favorite, is the Arts Tower.  At the time of its opening in 1966, it was the tallest building in Sheffield.  However, this is not why this building is so cool.  In order to get students in and out of class quickly a paternoster (a continuous elevator) was installed, pictured on the right.  This is one of the few still in use in Britain.  The running joke to tell Freshers (Freshmen) is that if you ride the paternoster over the top it will flip you upside down.  Don’t get too excited though.  It actually just moves laterally across the top and comes back down the other side… nothing too dramatic.

Sheffield is unlike any other city in Britain.  Its unique attributes give it a certain charm.  Living in Sheffield, you live about twenty minutes from the Peak District.  People from all over the world come to visit Sheffield just for this attribute.  Its unique rock is a major attraction to the climbing community.  (Pictured on the left is the view from the top of Stanage Edge, a popular hiking and/or climbing spot in the beautiful Peak District just outside of Sheffield.)  Sheffield also differs from most other cities in its recognition of local political heroes instead of only kings and queens of England; ranging from 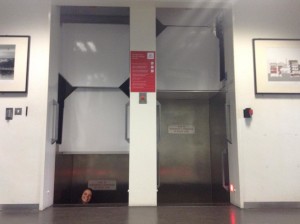 Ebenezer Elliott (a factory owner and poet) to Samuel Holberry (a Chartist activist who led an armed rebellion in Sheffield).  In different parts of the city you see statues or memorials (e.g. Holberry Cascades in the Sheffield Peace Gardens) 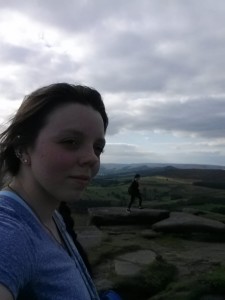 commemorating these people who did their best to improve the lives of their neighbors.  This sense of local pride is inexplicably charming.