Read about how Everette found comfort in cultural differences during her study abroad program in Germany. 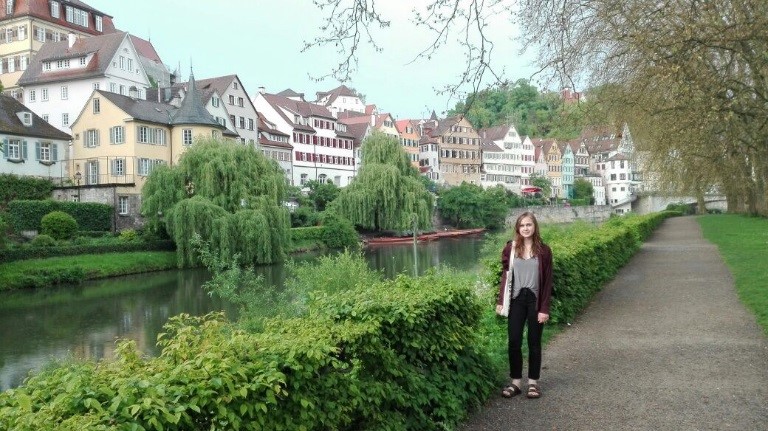 One Foot in Front of the Other

When I told people I was going to study abroad, nearly every conversation confronted the topic of “culture shock” in some way. Thus, I was expecting to experience difficulties adjusting to my new cultural environment when I came to study in Tübingen, Germany. To my surprise, there was no real “shock” when I arrived at my new home for the next three months – in fact, my first few weeks felt like a sigh of relief.

The first cultural difference I noticed is the way the Germans deal with waste. After drinking a cappuccino (heaven after a ten-hour flight), I went to dispose of my cup, and found four separate bins for different categories of trash and recycling. Although surprised and slightly confused, it actually brought a smile to my face to know my coffee cup would not end up in a landfill. Each time I’ve had to sort my trash into the bins, I’ve become more conscious of the (unnecessary) waste I’m contributing, and thought “Why hasn’t it been like this all along?”

My second culture “shock” occurred when observing how Germans behave in public spaces. Back home, it is not uncommon for someone to sit next to you on the bus and strike up conversation, and interactions with cashiers always involve small talk – something I personally hate. Parallel to the German language, which distinguishes formal and informal interactions through the use of “du” and “Sie,” there seems to be an unwritten rule demanding the respect for strangers’ peace and privacy. People seem to be much more reserved and quiet in public spaces (buses, grocery stores, train stations, etc.) and small talk is practically unheard of, which I find somewhat relieving.

Lastly, people mean what they say. Germans are often stereotyped as being “blunt” or “rude,” as a result of the directness and clarity which are values central to German culture. According to my new German friends, it is considered somewhat rude to lie in order to avoid hurting someone’s feelings, at least in most situations. Stemming from this, there is the common notion of, “I wouldn’t have offered if I didn’t want to do it,” which I find incredibly refreshing. In America, it is common to say “Oh no, it’s okay” because you do not want to burden the other person, even if they have offered (to make you a cup of coffee, for example). Yesterday, one of my friends from the area owed me €8,50 for a train ticket, but instead gave me €9. I offered to give her fifty cents, and even after she said “No, that’s okay,” I continued to dig through my purse to find a coin. “No, really, it’s okay,” she said… Somewhat awkward, but ultimately refreshing – you do not have to worry so much about doing the wrong thing, because you know someone would certainly tell you if you were.

I never expected to fit in better in German culture than I do in my own. However, this experience has already taught me so much about myself and my values, which apparently seem to line up quite well with the German culture. This can all be summed up by an example used by the teacher of my Intercultural Communication class:

There are three types of people when it comes to adjusting to a new culture. The first has a desire to “enlighten” the people of their host country. For instance, perhaps there is a culture in which it is normal for everyone to wear only one shoe. This first type of person would come to their host country with a suitcase full of shoes, and offer everyone what they have “been missing.” The second is willing to try out new customs, but needs to retreat to comfort after some time – perhaps wearing only one shoe for half the week, and then returning to what they find comfortable. And the third throws off one of their shoes as soon as they land in the new country, and says “Yes! I’ve been waiting all my life to walk around with only one shoe.”

Unexpectedly, I identify most with the third.