Growing up, I wanted to explore and experience everything possible. I dreamed about traveling and saved my roots for the exotic places I would visit someday rather than plant them in my familiar life. I never allowed static friction to ground me anywhere, so when I decided to intern abroad, it was easy to leave everything behind.

On Friction and Balance: Vietnam Taught Me Physics

Several weeks ago, I climbed Fansipan, the highest mountain in Indochina, in one day. The trek took place almost exactly six weeks into my internship and lasted 11.5 hours in total; so, I had a lot of time to think. 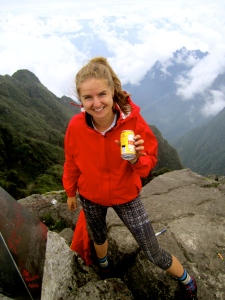 Armed only with worn out, minimalist running shoes, I soon realized that amid the various slippery surfaces—mud, rock, streams—each step would be crucial to my success and survival.  I noted the confidence our Vietnamese guide exuded in his steps and wondered what he had learned in his 300 trips up and down the mountain. And for the first time since my senior year AP Physics class, I thought about friction.

There are two types of friction: static and kinetic. The most important difference is that static is stronger, and requires more energy to change. This is why a cup can remain standing on a slanted surface. When kinetic friction takes over, movement breeds momentum and, according to Newton’s first law, will continue until an outside force acts on it. Our guide had mastered the art of steps that created tiny bubbles of static friction within movement, tiny moments that allowed him to keep climbing confidently. I fell several times on the descent because I could not break the momentum of my kinetic friction.

Growing up, I wanted to explore and experience everything possible. I dreamed about traveling and saved my roots for the exotic places I would visit someday rather than plant them in my familiar life. I never allowed static friction to ground me anywhere, so when I decided to intern abroad, it was easy to leave everything behind. 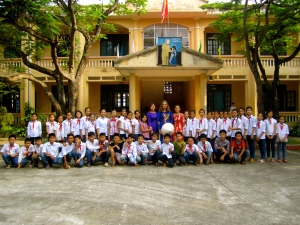 Here, especially in the countryside, I see people with roots not just planted, but interwoven with their families, their homes, their destinies. With static friction that strong, it’s nearly impossible to find a force big enough to break it.

My Vietnamese friends envy me for my freedom and independence, but I envy them for their solidity of purpose. They feel fulfilled with their families; they know that they are needed. I value my personal freedom above most everything, but on some level, I want to travel because I have never fully fit in one place; I have never been needed so much that I cannot leave. I can wander, but they belong.

I’m not sure which type of friction is better, or if there’s any reason to decide. Science does not favor one force over another, and this frames another phenomenon that the Vietnamese execute flawlessly: balance.

In the countryside, mornings begin when the rooster crows, usually around five a.m. Farmers flock to their fields and work for hours, but at lunch time, between 11 a.m. and two p.m., everything shuts down. The fields empty, the shops close, and everyone returns to their home and families for food and rest. When it rains or thunderstorms, work ceases. This daily schedule reflects a value system rooted in family ties, and it produces people with more happiness and kindness than anyone I have ever met. 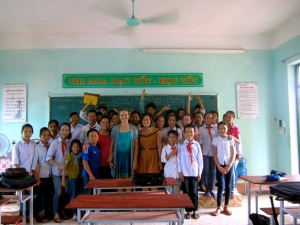 When I arrived in the countryside, I quickly learned how unstable my equilibrium had become in my own culture. When I left the countryside, I questioned how I could ever value anything above health and well-being. Every Vietnamese person I met helped support me and restore me to a balance I have sought for years without success. I did not notice the subtle shift when it happened, but that’s precisely how physics works: tiny, almost invisible things give the world a peace and a purpose. Vietnam did the same for me.