Read about Jamie Hollamon exploring music through the streets of Ireland while interning at the University College of Cork.

I’ve been to 3 bars with live music in the 3 weeks I’ve been here. All of them different from each other.

The first was a student open mic night I went to with my roommate Ben. Everyone there was crazy talented! My roommate Ben planned on singing a Sam Smith song (My favorite!! Love Sam Smith so much!!), but they only had a guitar and Ben doesn’t know how to play. Hopefully next time they have a piano so Ben can play some Sam Smith for us! That night I heard talented students play a lot of pop like Ed Sheeran, George Ezra, Taylor Swift, Beyonce, and others. 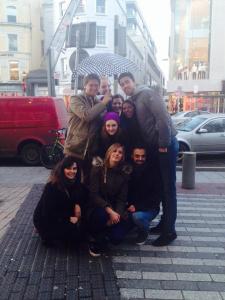 We ended up going to a pub that was having its weekly Live Traditional Irish Music Night. I’d been to this pub a few times before and it usually isn’t crowded at all but on music night it was crazy! There was a line to get in the pub, a huge crowd around the bar, and people everywhere. We decided to go to a pub up the road that had less people. Once we left the Irish music behind the night got much better. We all just sat in a booth talking about our home countries, since none of us were from Ireland. We were 2 Americans, 2 Austrians, and an Italian. It was much nicer than the busy, noisy pub we left. I still don’t even understand what traditional Irish music is… All the music at that pub just sounded like punk/pop music. I didn’t understand it at all. And I probably won’t go back to figure it out.

On Friday my roommate Daniel and I decided to wander around down town to find some place for dinner. We ate at a pizza place and then decided to go to check out a pub that was playing the song “Wonderwall” when we walked by. It turned out to be a sports bar with a live band for the night. It was cool. We sat and listened to the band while we drank. The band mostly played pop music, but they played some other stuff too. They played Mumford and Sons, Adele, the theme from the Big Bang Theory, as well as some 90’s music. It was an awesome place to randomly stumble upon.

Something else I’ve noticed here in Cork is that they are very big on their Irish musicians. The two artists I’ve heard the most here are Hozier and Kodaline, both of which are from Ireland.

Hozier is probably one of my favorite artists. I loooove him! I hear him everywhere, and I’m always hearing different songs by him when I’m around Cork. It’s super awesome for me because I get excited every time I hear him. I enjoy hearing his songs because his music always reminds me of my mom. It reminds me of her and time we went to see him together back in Portland in November, and my mom and I would always listen to him in the car. So it is nice to be randomly reminded of my mom when I’m so far away from home. His song “Take Me to Church” is popular in America right now. 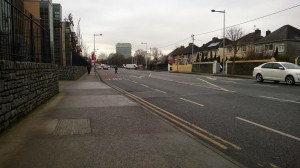 The other artist I keep hearing all over Cork is Kodaline. I’ve even seen posters in pubs and restaurants advertising their new album. It think it’s awesome how loved they are here, especially since not  many people in America seem to know who they are. I’ve never been to one of their concerts, but I’m dying to see them! Hopefully I’ll get to see them here! I’ve kind of found a new love for them since I’ve been here. The name of my blog is actually a line from one of my favorite songs by them. It’s called “Brand New Day” and I heard it on my first day in Cork while I was at a diner. The song is sort of about leaving home and going to see the world, which is what I’m experiencing. The song makes it all seem so beautiful and romantic instead of scary and overwhelming. I think it is my inspiration song for this trip. The line my blog name comes from is:

“Come away with me
Just think of all the places we could be
I’ll be waiting, waiting on a brand new day”

Talk to you guys soon! Enjoy the new music! ♫♫♫

You can read more about Jamie Hollamon’s adventures in Ireland on her blog at https://alltheplaceswecouldbe.wordpress.com/