My time in Japan thus far has been a wonderful learning experience. I will admit I have missed home and I have definitely learned the value of certain things I did not value so much before.

My time in Japan thus far has been a wonderful learning experience. I will admit I have missed home and I have definitely learned the value of certain things I did not value so much before. When I first arrived I felt slightly overwhelmed by two things. First, everyone spoke a different language and those few locals who spoke English spoke a very broken version. Second, everything was written in a different language. Another interesting point is technology. A lot of the simpler technology back home things like toilets and hand dryers were very ordinary and every day, 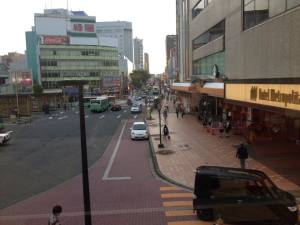 but here they have a wider range of features and are much more complex. It’s silly to think on it now, but these little things made Japan so much more intimidating and equal parts endearing. In all honesty though the feeling of intimidation and a general nervousness did not last long but it did leave an impact. I found myself greatly appreciating the craziness of it all. It made the whole experience feel more real to me. Having such a stark shift in what was ordinary was honestly very exciting. However any sense of fear eventually faded, when I was finally out of the airports.  Once I was on the ground in Akita Airport and on the bus to my temporary school abroad, things began to look up. I made a solid group of friends on the first day and since then, Japan has been nothing but an adventure. I have spent my time here slowly mastering the basics of the language and visiting various places around Akita prefecture with my friends. I will admit I was nervous at first, but being here has taught me that with a solid group of friends I’ll be fine facing whatever challenge presents itself.