It Takes A Village

Yesterday, I traveled to a nearby village to conduct health surveys. KIHEFO, the organization I’m working for in Kabale, Uganda, is surveying all the surrounding villages to get a sense of the most prevalent health issues. Five of us interns and two local staff members were driven to a village just outside of Kabale.

Tony, our driver, took us down the dirt roads in a zig-zag fashion to avoid craters in the ground. We arrived at a small field and were greeted by cattle and goats who were just freely wandering in the grass.

Two young men from the community came to meet us and we split into two teams. These men keep track of which households have been surveyed. I went with two other interns and our staff member, Scodius. We carried an old beat up scale, a long stick with a measuring tape attached and our surveys. We walked to our first household where three women greeted us – “ah ghandi” (Hello, how are you) – “knee jay” (I am fine). Two little children were at the front step, eager to observe what we were doing. Several other children appeared from behind a hedge of bushes, laughing and hiding whenever I looked their way.

Scodius asked which woman was the head of the household and explained to her that we work for Dr. Geoffrey Anguyo and we’re conducting a community health survey. The woman gave her consent and Scodius told me to ask the survey questions in English. Scodius translated my words into the local Rukiga language so the women could understand what I was asking. The translation thing seemed like a waste of time and energy, but Scodius insisted on it so the other interns and I could understand what was being said. The 50 questions we asked covered a range of topics and I’m sure if we conducted this same survey in the States, people would feel as though we were crossing some very personal boundaries. I started off by asking the woman her month and year 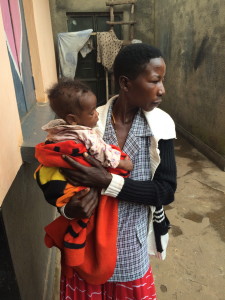 of birth, what level of education she completed, how many children she has given birth to and of those children, how many had died. I asked what material the floor and roof and walls of her house were made of. I asked if anyone in her household owned a watch, a radio, and if she had electricity, water, soap and a toilet of some kind. I asked about her religion, family planning methods, and what kind of health care she has received. I asked her how often she ate various foods, including sweet potatoes, rice, meat and milk. And lastly, we took the height, weight, arm and head circumference of all her children under five years old to screen for child malnutrition.

The answers to my questions were eye opening and from the activity going on around me, I gained a deeper understanding of the meaning, “It takes a village.” First of all, I asked to measure a little 2 year old boy who was sitting next to the woman I interviewed and she told me he wasn’t her child.” She called for her daughter, Miracle, who came running over from another house. It seemed as though everyone treated each other like family. At another household, a boy was playing outside and the mother spoke to him in Rukiga. He took off towards another house and came back hand-in-hand with a little girl who was the woman’s only child.

Of the 5 households we interviewed, most of them ate at least twice a day. One family ate one meal per day, either lunch or dinner. People in this village primarily eat the food they grow – sweet potatoes, avocados, and cabbage – but they also spend an average of 10,000 shillings (about $3) a week on other food items such as rice and beans. They only eat meat on Christmas and rarely drink milk, as these foods are expensive by local standards. Houses were constructed of bricks and cement or of bamboo and clay. None of the families had electricity and all had a pit latrine toilet somewhere outside their house. There were no men around because it was customary for the husbands to find work in Kampala, the capital city that can be reached by bus in 10 hours. Husbands saw their wives maybe once a month. The average number of children per household was three and the children I saw appeared to be well nourished.

I’m grateful to be gaining insight on life in this part of the world. Many families in Uganda experience poverty, but what I’m learning is that their souls are rich with love for others.