Tyler Richardson quickly learns about the differences between Japan and the United States but continues to push himself to learn more.

Japan has been a crazy ride thus far in my study abroad trip.

One of the first things I noticed when I arrived on my flight in Japan was the instant change in the humidity. Before coming to Japan I knew that Japan’s climate was hot and humid, but I figured that it couldn’t be as bad as some people made it out to be. Oh boy, was I wrong. I came with a large bit of luggage, and carrying it around the airport in the insane humidity while having to figure out how to get into the country was quite the ordeal. The high temperature and the absolute crazy humidity had me profusely sweating the entire time I was in the airport, all the way until I got home.

Getting home was an adventure as well, as I had never really ridden public transportation, and Japan is all about public transportation. Thankfully my roommate and I (who accompanied me on this trip) had both taken Japanese at Oregon State for 3 years, so we were able to ask for directions on how to get a ticket and arrive at our apartments. We originally got on the Narita Sky Lift, which was pretty quick and convenient, but once we hit Ueno things started to get really confusing. First we had to look at the kanji and try to figure out which station was our destination. Thankfully we were able to understand it since the kanji was simple, but we still didn’t know how to get tickets. We only knew that we had to go to the ticket machines and select a number that was associated with our route. We later found out that the “number” meant how much the trip costs, and as long as you pay the correct amount, you can go to multiple different end locations that cost that amount with that ticket.

Riding the trains was/is crowded. Really crowded. It didn’t help that we were carrying a lot of luggage either. I was completely drenched in sweat at this point, and everyone on the train was looking at us. Once we arrived and went through a decently-sized ordeal to get to our apartments, we felt completely drained. To be completely honest, I was so overwhelmed that I wasn’t sure I even wanted to be in the country anymore, but I wholeheartedly knew that was a fleeting feeling. We went out and found a local ramen shop and ate there, even though we were completely stressed out and weren’t hungry because of it. 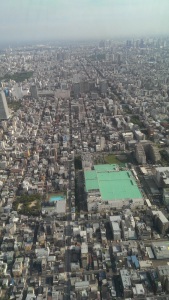 The next day, things were SO much better. Since my friend lived really close to me, we met up in the morning and walked to the station together. Since we learned all the hard stuff about transportation the day before, going to school was a complete breeze, especially since we had no transfers. Although we initially had issues finding the building we were supposed to go to on campus, we found it, but not before having breakfast at the local Mos Burger. My Japanese friend had told me about Mos Burger and how good it was, and so we stopped in and had a very satisfying breakfast for about 380 yen.

At the school we had an orientation. During this orientation we learned everything we needed to learn about being a student at Waseda, and then we went on an excursion to Tokyo Sky Tree and Asakusa in the early evening. We first went to Tokyo Sky Tree, which was definitely a big tourist attraction. I’m not the biggest fan of large tourist areas, since they’re very crowded, but it was definitely interesting to see Tokyo from such a high point.

After Tokyo Sky Tree we visited Asakusa, which is yet another popular tourist spot, but has a very big shrine located in the middle of it. This is pretty much where I started feeling REALLY good about being in Japan. The place was beautiful, and there were many local merchants selling a variety of goods. The shrine was really huge, and it was a pleasure to look at.
​
What I really enjoyed about Asakusa though was the dinner that happened later on. We all sat in a decently-sized dining hall and got served a traditional Japanese meal. It was here that I actually met a lot of the friends that I would come to hang out with during the duration of the program. 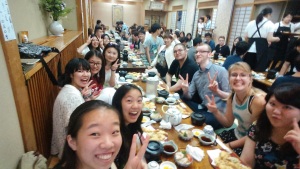 The school life is fairly intensive. Because I’m doing the summer program, school is from 10:40-16:15 every Monday through Friday. It’s very intensive Japanese courses that are taught solely in Japanese, which I really didn’t expect and had to get used to really quickly.

On the weekends I’ve gone to a few other places. For example, the first weekend after my arrival, I went to a city I’d been wanting to go to for a while–Akihabara. I didn’t get many pictures since I’m actually pretty bad at getting pictures since I’m all about immersing myself in the experience and committing everything to internal memory. 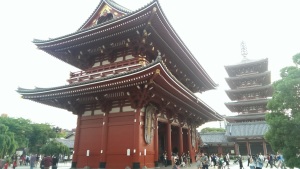 ​
Of all the other things I’ve done so far, I’ve gone to a concert in Kichijouji, hit up a Hanabi Taikai (fireworks festival) near Adachi, and attended a parade in Ueno–walking around Ueno afterwards.
​
After the program ends, I have plans to go to Kyoto and plan to take a lot more pictures there, so in my next blog post I will talk about the things that I’ve seen in Kyoto.

Some things that I’ve learned in Japan is that it’s really important to have a strong sense of independence. You really need to understand and know how to do things yourself in Japan, especially during traveling and getting around on transportation. To be honest, I still have some difficulty with it now, but since coming to Japan I’ve gained the skill of being able to use my resources to find my way around any city that I’m in.

Additionally, data connectivity is a must. Since there are so many places you can go, and so many train lines that you can ride, you need to have some sort of method of getting yourself around the many cities of Japan. Sure, you can get a map and use that, but eventually your maps start to build up in your bag, and then you need to pull all of them out to start planning your route–plus you don’t know how much everything is going to cost until you’re actually at the station itself.

Since I’ll be in Japan much longer than just this summer, I plan to discover more many things and experience many different kinds of people and places. I will write about these experiences and continue them in further blogs.