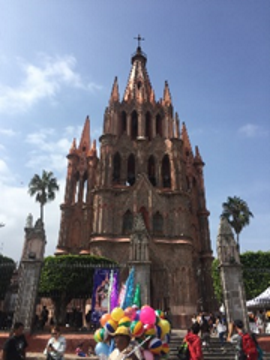 I’m already almost done with my eighth week here in Mexico and I can hardly believe it! Although I miss my family, friends, Dutch Bros. coffee, and Red Robin french fries, I’m constantly grateful for my host family, my study abroad program (IE3 GLOBAL), the program coordinators, my home university (WOU), and the university here (UAQ). Most of all, I’m glad that I still have three weeks to enjoy this incredible city!

so, how are classes going?

Gee, glad you asked! I’ve taken a total of six classes here (three during Session One, three during Session Two). These have included history, communication, literature, and writing. They’re conducted entirely in Spanish (because we’re in Mexico- duh) but the professors are very understanding of the fact that we’re all still learning the language. Essentially, in every class, I’m not just learning Spanish, I’m learning all the content as well. The literature classes have been especially interesting for me because, well, I like literature, but also because text analysis in another language requires thinking beyond simple translations. History at 8am is pretty rough for me. However, we get to visit museums and other historical locations in the afternoon in historic downtown Querétaro, which is incredible. For example, to be standing in a church that’s hundreds of years older than my entire country is pretty humbling.

When I was in middle school, I was going back into the locker room after P.E. while the female teacher was leaving. We almost ran into each other. She said to me, “this is America, we pass on the right!” I’ve never forgotten that, and I think about it often as I’m walking down the sidewalk. In the Unites States, it’s an unspoken rule that almost everyone follows. But here in Mexico? You could be walking down the sidewalk and pass people on the right, the left, or walk right through the middle of a group and nobody would really think much of it. At first this seemed chaotic, disorganized, and inefficient to me, but now I don’t mind it so much.

I’ve been told by at least two people that Mexican culture is dog-eat-dog and every man for himself. The first time I heard it was in conversation with a Mexican guy around my age. The second was an older man from the U.S. who has lived in Mexico for around forty years. This surprised me because I’ve experienced the opposite. Mexican people are friendly, kind, and quick to share. Nobody has made fun of me or treated me in a negative way when I speak in broken Spanish. In my house I have to refuse food because I’m offered so much. Of course I do see the “every man for himself” mentality manifesting itself, but not notably more in comparison with the culture of the states.

thoughts on language learning in a foreign country

My one over-arching thought is that it’s incredible. Of course sometimes it’s frustrating, difficult, and confidence-draining. I feel those things almost every day. However, it is, beyond a shadow of a doubt, worth every minute. The development I’ve experienced in all aspects of my Spanish language skills has definitely met the expectations that I had going into this. Often I’ll find myself in the middle of whatever I’m doing (sitting in class, taking a taxi, going shopping, spending time with my Mexican family, etc) and realize how amazing this all is. How many risks I’ve taken, how many times I’ve stepped out of my comfort zone, how many times I’ve felt defeated and then infinitely proud of myself. These experiences, relationships, and lessons simply don’t exist in the classroom. I’m thankful for every difficult moment (of which there have been many) because I’m growing and learning from each one.