Read about Adrian Engstrom hiking through the mountains as he interns through the Trek to Teach program in Nepal.

This final hike from Chhomrong to Ghandruk was easy. We went downhill through Jhinu, a small village famous for its hotsprings, and then across some terraces where wheat was being grown. Rabin showed us how to eat a thistle plant they have here: cut off the pokey bits, peel the stem a little, and chew it like celery. It was very, very good. We also ran into some fruit which looked like orange raspberries growing on a tall, thornless bush. We crossed the river at the bottom of the valley and started uphill. The water this far from the source is white with silt, and it looks like milk until it gets to urban areas where it becomes polluted and sludgy. The riverbeds are covered in sedimentary rocks, many carved smooth and ringed with layers of different colors. Everything about the landscape is beautiful. 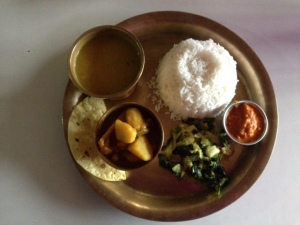 On the way up we passed more terraces where corn and potato plants are being put into the ground and have their plots carefully tended while they’re young. Recently turned soil is a warm, dark brown color, and its smell and the sight of the green of the plants against it makes me feel joyful and celebratory. I can easily understand how someone living an agricultural life would assign spiritual meaning to the seasons and their cycles. While the sun beats down on me, as usual, I’m finally tan enough to fully enjoy its warmth. The glittering blue slate walls with ferns growing in their cracks, the chirping birds (“charaharu”) flying between trees – the small ones which I love best practicing the flap-rise and tuck-fall style of flight with their tiny sharp wings – the sudden group of women in red lips and red flowing dresses working in the fields… all is ripe and full. Summer is sweet.

On the way up to Ghandruk, after we passed from some terraces into some jungle, there was a small mill-house that Rabin showed us. It needed a surprisingly small stream to operate, the water of which it widely sprayed out the other end like someone was capping a hose with their thumb. The millstone was of slate, thin and perfectly circular with a hole in the center. It was about the size of my torso or a little smaller. The apparatus for converting the flow of water to the turning of the stone is a wooden piece which is shaped like a gigantic cork. On the wide top it has holes for paddles to be inserted. Dropped into the water, they turn the entire mechanism.

The wheat is being taken in at this time of year, which we saw around the area of Jhinu. They cut the wheat with a small, one-handed scythe. The heads are placed into a sack carried with the other hand. This is taken to farmers’ houses and put right outside them in small square clearings of stone. It’s left to dry in the sun, occasionally stirred by a farmer in flip-flops walking through it in spirals, and then presumably taken to the mill-house. The wheat hay is left standing and is eventually cut down to be stacked in large ovoid piles for animal fodder. They also grow corn, potatoes, peas, barley, and millet here (though I don’t think I could distinguish those latter two from wheat). The only vegetables I’ve seen are cabbage and onions, which in their own right make for beautiful fields. We ate some dry peas on our hike, courtesy of a man who said he could do the remaining 3 hours of our route to Ghandruk in an hour. Looking at his wiry body, so tan that I’d guess he was brown on the inside, too, I didn’t doubt it. The people here are tough.

We rounded a corner and started to see houses. Ghandruk! It’s nearly entirely a stone village, a fact my guide made so big a deal about that I’m sure it was some deep significance. We got to the guest-house, rested, and went to the school and met some very rough-and-tumble kids who relay raced and played tag and sang to a Nepali version of Duck Duck Goose until I was totally exhausted. We met one of the teachers, who will be supporting me while I teach, and walked to see the old quarter of Ghandruk which looks like a medieval village. The houses are more densely packed there and all are stone. Corn husks dry in the sun, fastened to walls, and piles of firewood make neighbors with water buffalo who moo complainingly. I think it’s a lot less smelly than a medieval village would be, though – they have good sanitation, excellent design of streets so that water neatly drains off, and very little trash.

I took a walk uphill from Ghandruk. It steadily becomes jungle, and the last house I ran into was occupied by a very old couple who happily talked with me in broken English about the beauty of the landscape and the extent of their garden. Golden terraces of wheat in front of us, as we sat on a high stone fence and looked down at the trees and the valley, gave way to freshly tilled rich brown soil with little grooves in it for the future paths of water. The man lifted his white-stubbled cheeks with smiles at every topic, and the woman’s eyes crinkled beside her several earrings as she pointed things out to me. I felt a kind of peace there that I’ve never felt before. 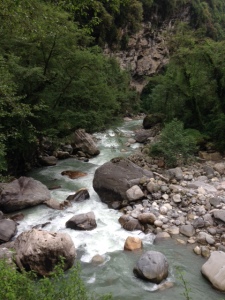 Further up I found a clearing with three shrines, their white wombs empty of deities. I sat there for a little while and meditated and was interrupted by two shepherds who lounged beside me as their goats browsed. We looked out quietly. Villages sit on the slopes of hills, set into spaces where the forest has been cut back from the earthen knuckles and water-carved dimples around. Deep river valleys lay between these ranges of hills, and in the mornings are filled with visually impenetrable rolling fog as if descent somehow led to realms impossible and infinite both. The tops of the hills are scarved with congealed clouds of mist and the toes of the thick rain clouds above. At night, when there are thunderstorms, far-away lightning silently highlights the surrounding peaks making them appear as couriers in silhouette moving on tracks unknown to all but each other.