Read about Lance Umagat exploring the gaming world of Tokyo as he studies abroad at Waseda University in Japan.

Exploring the Gaming World of Japan

Soon after arriving in Japan I had the privilege of exploring several different areas in the country. These trips took place during the first few weeks after school started. I was able to see a flower viewing festival, several different school campuses, the release of a new arcade game, and was finally had my chance to see a life sized Gundam (giant robot from the anime). During all of these events I was able to meet many different and interesting people, although half were also exchange students. 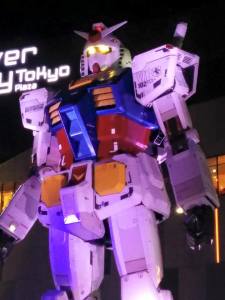 While out with an old friend, a few days before classes started, she took me to first visit Waseda University where I got to meet her mentor. At  the school I met a few interesting people and went sightseeing around several of the campuses. I got to see the founder’s statue — the schools defining symbol, which is a clock tower — and see a club recruiting festival. After visiting the last campus and having lunch we made our way to the river front. I got to see the vibrant colors from the festival vendor booths and the moonlight reflecting off the water onto the sakura flowers. I also got to try the sakura wine that was available there.

About two weeks after school started, one of the friends from school invited me to go and see the new Final Fantasy arcade game that was being showcased in Akihabara. The game isn’t like the classic Final Fantasy games but more like Tekken where people are teamed up and pitied against each other. However, after getting there we quickly found out that we needed to sign up to have a chance to play, but they were full for the day. This didn’t discourage us and we ended up watching several games and then walked around Akihabara. While walking around Akihabara, we went to many different game centers and tried our luck at the prize grabber machines. I won a poster from an anime I really like! Although we didn’t get to try the new game, the trip was worth it.

About a week after the Akihabara trip, I went with some friends from my club to Odaiba. On the way there we ended up missing our stop and accidentally went to Yokohama. That mistake added 2 hours to our travel time and we ended up missing our chance to walk under the Gundam. We took many pictures of the Gundam and then went exploring around Odiba. Rainbow Bridge, Aqua City, and the mall are among some of the places that we went to. While in the mall we found a Sega theme park called Joypolis, but didn’t go in since it was closing in an hour. Up one floor was a massive game center. We tried a punching game and I ended up winning! After eating dinner in a food court we returned back to the train station and headed home. 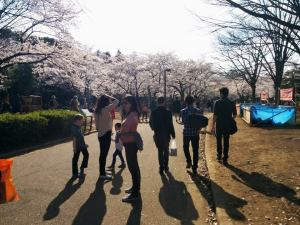 All in all my time here in Japan has been spent mainly with friends exploring many of the tourist hotspots. I have seen a few festivals and I am very excited to see more as my study aboard continues. If there is one thing that I have learned from being in Japan it is that you should be more outgoing and try to integrate yourself into the society rather than being shy. Japanese people are very accepting as long as you aren’t offensive and rude. Through my recollection I have noticed that I have spent a considerable amount of my time in game centers. Although I want to visit more of the historic culture sites in Japan, staying mainly in Tokyo ’till I get a break is good for now.