Since arriving in Cape Town over one month ago, I’ve had amazing and exciting experiences.... 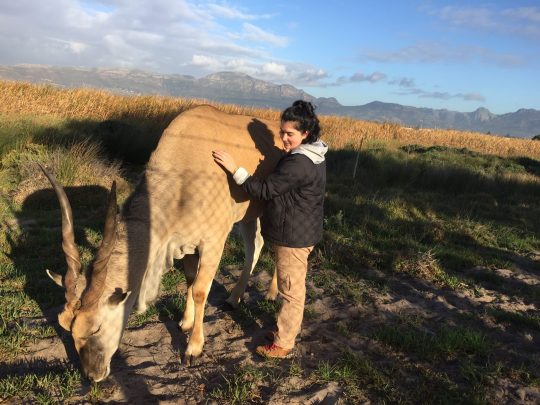 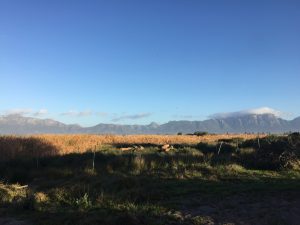 Since arriving in Cape Town over one month ago, I’ve had amazing and exciting experiences. One of these, is the opportunity to intern in The Gantouw Project at the Cape Town Environmental Education Trust (CTEET). CTEET and The Gantouw Project’s goal has been to conserve the biodiversity of the Cape Flats Dune Strandveld, an endangered habitat that is only found in the lowlands of Cape Town, by introducing a small herd of eland to browse the vegetation and prevent bush encroachment within the Rondevlei section of the False Bay Nature Reserve. This project has been running since the Fall of 2015, when five young eland were brought to the reserve and began getting familiar with their monitors and their new environment. Interning in a conservation project as an eland monitor has been so rewarding. I have learned so much about the hard work and dedication it takes to be a part of an organization like CTEET and The Gantouw Project, which work hands-on to look at the relationship animals have on the conservation of habitats. My most moving experience since working at The Gantouw Project was the first time I walked with the eland, out into the nature reserve. 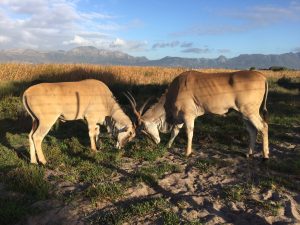 It was early in the morning when an eland monitor and I headed out to release the eland from the boma, in which they stay overnight, and lead them into the field. The sun had just risen and the crisp morning air was really refreshing. We let the eland out of the boma and as we began walking out into the reserve they followed behind us. I was really surprised by how settled they were to their routine and how comfortable they seemed around people. It was intimidating to be in such close proximity to the eland because, although they have become accustomed to being around their monitors, they are still wild animals and quite large ones at that. While we walked into the reserve, we occasionally stopped so that the eland could walk around between the bushes and browse the vegetation. Monitoring the eland and observing them while they were out in the field was a really unique experience for me. I had never had the opportunity to have contact with a wild animal like that before. Occasionally, while we stopped to allow the eland to eat, one or two of them would wander closer to the monitor and I and they would allow us to stroke them and by doing so I was able to begin establishing stronger bonds with them. 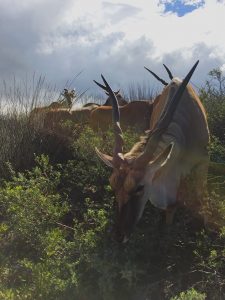 It was an incredible experience to have the eland show that they trusted me enough and were comfortable enough that I could stand near them and stroke them.

This experience was very eye-opening for me. I felt very much in touch with nature, my surroundings and myself. It made me realize more than ever that the world is a really incredible place and that as people in the 21st century, we become preoccupied with school or work or other things in our lives and we take it for granted. It also made me appreciate organizations like CTEET and The Gantouw Project so much more. Conservation projects like this are the reason why the world has the nature reserves, national parks, and nature preservation areas that remind us of what our planet is meant to be.