“Nearly everything in the city is within walking distance. It’s so small.”—Joe C., Cork resident... 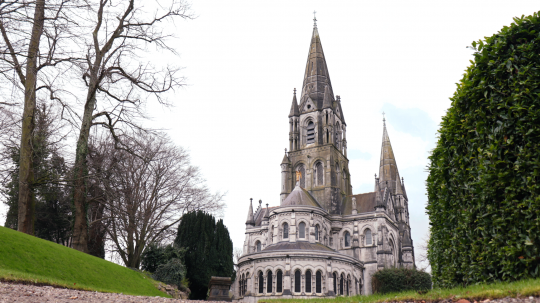 “Nearly everything in the city is within walking distance. It’s so small.”—Joe C., Cork resident

I stood in the middle of the sidewalk, gazing up at the trio of people who towered over me; the unflinching faces of Wolfe Tone and Thomas Davis looked down with disappointment, while on her pedestal above them Mother Erin outright refused to acknowledge my presence. I peered back over the road I’d come from, striving to identify something—anything—which I could use as a landmark.

Nope. I’d been in Cork for less than fifteen minutes and was already lost, with no Internet connection to load maps on my phone or contact anyone. Now, any reasonable person would simply walk up to someone who looked like they knew what they were doing and ask for directions. This makes sense, yet there’s one thing you should know about me: I tend to not always be the most sensible individual. 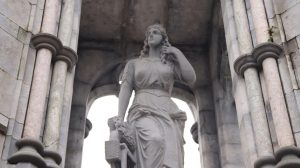 I had arrived in Cork, the second-largest city in Ireland, as part of a weekend trip from the University of Limerick. Coming from a relatively rural state in America, Cork was far bigger than any city I’d set foot in before. As I gazed up at the four-story buildings which surrounded me, I noticed it was impossible to see distant structures which could serve as landmarks. This would’ve been fine had I been with a group, yet I’d managed to get separated a few roads back while trying to find some friends—therefore, I was alone and completely turned around, with my only guide being that I had to be back at the bus by 3:30 p.m.

Okay. How could I make the most of this situation? I knew I wanted to take some photos during the trip, and I’d spotted a pair of cathedrals on my way to getting lost, so those seemed like excellent spots to check out. Luckily, I could see the spires of both buildings from where I was standing on the River Lee’s bank, so I formed a plan: I would hit up the more distant structure first, then work my way back to the closer one while trying to figure out where my ride was parked. With a solid destination and goal in mind, I set off, dodging between throngs of people as I trekked over the Nano Nagle Bridge.

Although I didn’t know it at the time, my starting target was Saint Fin Barre’s Cathedral, a church which was completely rebuilt during the nineteenth century. The new building, topped by three spires and covered in ornate carvings, is a far cry from the crumbling mound which used to serve as Cork’s main religious center. While I’d recognized how large the cathedral was from a distance, actually being near it made me appreciate just how massive the building happened to be: it was practically impossible to fit the entire structure, from base to spire, in a single picture, even after I’d found a staircase and dropped partially into the ground. I probably appeared rather absurd, as I was practically laying down on a flight of stairs while holding my head back in order to see my camera’s screen. Luckily, I believe I was partially shielded from view by the nearby stone walls, but there was a random pair of people who magically appeared next to me at one point. I guess I need to pay better attention to my surroundings. 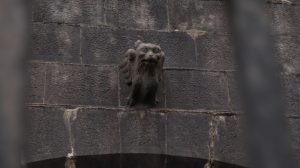 Knowing that time was still ticking, I moved on to the next point of interest, the Father Mathew Memorial Church. The only point of reference I had was the church’s steeple, which eventually came into view, towering over the rest of the city, as I rounded a corner. As I drew closer, I was immediately struck by the color of the fences—while I’d normally seen black or gray being used in design, the metal of this building was painted a vivid grape purple. I’d never observed any churches with such a bright hue readily displayed outside, much less on one whose towering presence lended it an air of authority.

I was now faced with a puzzling predicament: I was ready to return to the bus, but I still wasn’t sure where it had parked. I had to hurry if I didn’t want to be left behind. I suspected the easiest method of getting back to the buses was to relocate the three-story building I’d gotten separated at—future research reveals I was searching for the Hibernian Bar—yet I had no clue where that was. Normally, whenever I begin exploring an unfamiliar area, I’ll leave behind a trail of breadcrumbs in the form of “landmarks,” which are buildings and monuments that stick out or serve as the location of a direction change; since I’d been searching for friends during the first quarter of the journey, I’d neglected to take note of any markers, resulting in the confused state I was now in.

So, with the only information I had to go on being that a navy-blue building existed somewhere, I set off on my epic quest to find my way home. With 30 minutes to spare, I began following the wide, open road which I’d found myself on. I suddenly found a makeshift memorial on a corner, one of the few items I remembered. Turning down the street, I was elated to discover the navy-blue building at the next major corner—I was finally on the right track!

Though I ended up going the complete wrong direction after finding the Hibernian Bar, I was able to get myself turned around enough that I began recognizing some of the structures I passed, my pace picking up as I drew closer and closer to where I knew the buses were waiting; surprisingly, I managed to make it back to the transports with 10 minutes remaining. While I was disheartened that most of my time in Cork had been devoted to wayfinding, recent contemplation caused me to realize that I had an experience not shared by most of the group I arrived with: I’d gotten to see a good amount of the city, traveling nearly 4.66 miles over the course of three hours. My trip served as the first time I got to go out and explore a place on my own, as I’m normally either part of a group or simply going somewhere to accomplish a task.

So, if you ever have the chance to visit Cork, I would suggest you put your phone away, walk down a bunch of random roads, and get yourself lost—though finding your way back may be a challenge, it’ll result in an adventure you’ll never forget. While I wouldn’t consider the city to be small, it’s true that a good amount of it is within walking distance; I have first-hand experience which supports that.