It’s definitely different here in the U.S than it is in Nicaragua.  It’s not as...

It’s definitely different here in the U.S than it is in Nicaragua.  It’s not as simple, it’s more complicated, and there are a million more things to remember. Planning ahead – more than just for the evening or the next day – is hard to get used to again. I mean we’re talking days ahead – weeks or months even – after I’ve been living day-to-day for months. And people do things differently here too, but they also do different things. The activities going on in Corvallis today, for example: it’s game day and people are tailgating and throwing footballs, there’s a craft fair just a short bike ride away, with carved art and hand-crafted soaps that are way too expensive for me. Businesses actually exist here, too: to buy something you don’t have to take a repurposed school bus to the nearest town. And this is without to mention the need of feeding myself… the options are just so bad here. Let’s just say my body is having to adjust back to processed foods, something I’d rather just avoid. I guess I had forgotten how terrible some of the “food” here is and now my body is physically reacting, saying “ickkk, why did you put this in here??” In Nicaragua, everything was so much fresher and almost never with the chemicals or additives like I experience in almost everything I have immediate access to here: fast food, barbecue burgers, Oreos, mac and cheese, and pizza. 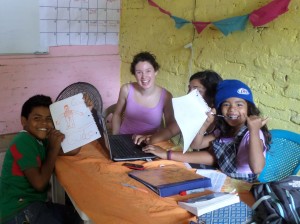 Of course, there are also a ton of things I’m really enjoying about being back here: my friends and family are wonderful! I just love seeing the people I’ve known my whole life and how we’re changing for the better. I love meeting other people I don’t already know here, too, but that’s similar to how I felt in Nicaragua, because I wasn’t always with the people I knew or was comfortable with. This comfort and exhilaration for the unknown is one thing that’s remained constant for me, and a main reason that I love to learn through traveling. Sometimes I do get a little more stressed here in the U.S., but I just need to remember that it will all be okay. A little stress is a good thing – it’s basically another bodily reaction to being enthusiastic and inspired in life! But excitement is different from anxiety; it’s all about choice of perspective. My work with Casa Verde was incredibly important too, but here my reach feels a little more impactful. Now I know I can actually do something about some of the issues that are taking hold of our world.  There, I felt lucky to be doing what I was doing, but I also felt very privileged relative to everyone else around me. I feel an occasional guilt here too, but less frequently… It’s not like I have everything ( not even close) here in the U.S., nor did I in the third world, but I do wish everyone could just live equally amazing lives to mine. In El Limon, the very small rural town I lived and worked in for over the summer, I felt like I was making a very important blip of an impact in one area of the world, in one small community, for a few handfuls of individuals. When I compare that to my work now, what I’m capable of here, I realize how my newfound perspective and empowerment can be used to reach hundreds, rather than dozens.

While in Nicaragua, I knew what I was doing was going to make a difference, but also knew that the effects of that difference wouldn’t be fully realized until I did something more. They say that a large percentage of what you learn through an international experience happens when you get back home. Now what’s great is that because of what I learned while abroad, I’m taking those next steps to do more. For example, something that always bothered me while I was there in Nicaragua was that people just burn their trash. This is simply because they have no trash system, despite the health and employment benefits it could bring – more jobs, less pollution, not to mention the environmental and climate-related necessity of it. I mean, they were all so worried about the drought while I was there, but I never found myself in a position where the community members felt empowered or inspired enough to do anything different than continue to support these harmful systems. Not that the landfills and ocean gyres of swirling plastic produced by North Americans are any less disgusting. It’s just easier to ignore that here in the U.S. – out of sight, out of might, right? Well, wrong – at least for me now. I feel like because I had to watch all of that and experience that culture of disempowerment first-hand, spreading awareness and being conscience of it have become much more present in my mind. I just can’t allow myself (or anyone around me whom I could possibly influence) to waste energy, or drive unnecessarily, or throw away recyclables, or any of that environmentalist mumbo jumbo. But I know there is even more I can do on a macro level by applying my intellect and passion to engagement in social justice. 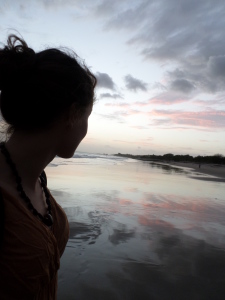 I never thought I would be looking into graduate programs for the year after I graduate, but with the experiences from my international internship I’ve found a new energy for learning. Now, I don’t want to stop learning and I know I never will. My perspective has been widened, showing me that the world is here for me to learn from and about. It’s not so much a new passion, as I’m still very much interested in Communication (my original major, with the International Degree addition to be completed along with a thesis based on my IE3 internship and international research), but the manners in which I can learn and utilize my skills in this field have been multiplied over the last three months like I never could have imagined if I had stayed at home. The international travel component was a large factor in my decision to embark on my internship with Casa Verde, but so was the program itself. It was extremely hard to know what to expect going into it, since words and pictures can only say so much – especially compared to being there, being in it. I threw myself into it from the start, even before I’d left the U.S. “You’re doing this,” I told myself, and that was a frightening and exhilarating realization, one I am so glad I decided on. It was worth it all.

My compassion for the planet and all of us on it has increased through my international internship, and now I just want to make a positive rippling impact. With a fresh perspective I believe I am actually able to do that. I’ve seen people who don’t feel like they have that power, but  want to improve things for the future. Because they have to work even harder for the opportunity to do so, I feel like I owe it to them all to do my best. And I plan to.