Fallon tells about his experience staying in Dublin and his favorite tour to the Giant's Causeway.

Day Trip to the Giant’s Causeway

Staying in Dublin was an experience in itself, but my favorite part of my trip to Ireland so far was my tour to the Giant’s Causeway. My best friend and I are doing this together, staying in the same hostels and going on the same tours and so on and so forth. Our first tour was the Giant’s Causeway tour and it remains to be my favorite. We started off by leaving our hostel around 6:20 in the morning, which felt more like 10:00 at night for us because this tour took place the day after we arrived in Ireland. We had found the pickup point the night before, so we at least knew where to go and about how much time it would take to get there.

We left Dublin around 7:30, being picked up in front of the Starbucks on College Green, and made our way towards the Causeway. The scenery on the way there was breathtaking, passing castles and farmlands, hills and valleys. Our guide, Kevin, regaled us with various myths that were associated with the places we were passing. We were shown the hills that inspired Gulliver’s Travels because of how they looked like a man’s face if he were laying down facing up, and we were told of the Salmon of knowledge, and we were also told many tales of Cú Chulainn. 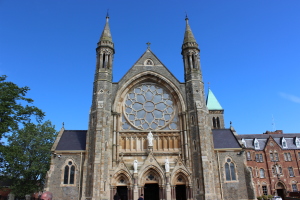 Before arriving at the Giant’s Causeway, we stopped off in Belfast, where we could either go to the Titanic Experience or we could take a Black Taxi and learn about the history of Belfast. We decided to take the Black Taxi and were whisked away into the city. We were first brought to some graffiti walls, where we learned about how every two years, the walls are changed to reflect the problems of the world and, if you were so inclined, you could get your own views put on the wall with the help of an artist. Moving on from the walls, we were shown a different wall, one that stands about three times higher than the Berlin Wall and divides the communities much the same. Every year, on July 12th, the two communities fight with each other because one side has soldiers march through the city and the other burns huge pyres that end up being about 50 feet tall right near the wall. The government wants the wall to be completely taken down by 2022, but the communities are fighting to keep it, preferring to keep the communities separate. From the pyres we were shown how to tell the difference between the two communities if we were ever unsure, which was to simply look for the flags. One side has British flags everywhere, on nearly every streetlight and strung between the buildings while the other side has no flags and if they do have a flag flying it isn’t a British flag. After we admired the many flags and shops, we were taken to a large church, where we were allowed to have a look around and see the various decorations. The church had an Italian influence and had many different statues and paintings among the beautiful architecture itself. After making a quick stop to admire the college, we were dropped off at the Titanic Experience to meet up with our group before making our way to the Causeway. 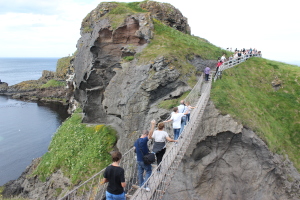 Once at the Causeway, we had to hike our way down to the stones, where we and many other tourists admired the views and hopped among the stones, climbing and descending them like stairs. Our guide told us to follow the red trail towards the steep stairs if we wanted a challenge and I had planned to go on the red trail, but ended up losing track of time at the stones instead of going the rest of the way down the trail. My roommate and I decided to start hiking our way back up the trail, which was a good 15 minute uphill walk. We had, of course, forgotten to bring water and ended up stumbling up the hill, dehydrated and exhausted. Of course, however, our tour wasn’t done yet. We made our way to the rope bridge a bit farther down the coast and had to hike to that as well. We had finished our waters and felt a bit better after our rest, but the hike was about 20 minutes of hills and stairs before finally getting to the rope bridge. Only eight people could cross the bridge at one time and my roommate was afraid of heights which, by the usual sort of coincidence, meant we were at the back of our group of eight and it took us a while to get across. We had no choice but to take pictures by the cliff edge and send them to our parents while we were on the little island before making our way back over and struggling back to the bus once more. Finally, we made our way back towards Dublin, our guide telling more of Ireland’s myths during the trip. We were dropped off in the Temple Bar area around 9:00 P.M. and had to make our ways back to our hostel for the night.