Travel can help us to discover who we really are. I feel this line is... 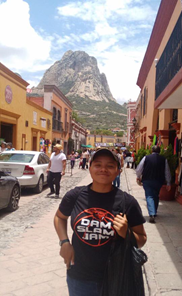 Travel can help us to discover who we really are. I feel this line is especially true for study abroad, because you’re living like a normal person in a completely new country. To start I should introduce myself; Hi, I’m Zhanè. I’m a Junior at Oregon State University studying Human Development and Family Sciences, Pre-Education with an English for Speakers of Other Languages (ESOL) endorsement, with a minor Spanish. Simply put I’m studying families and kids so I can be an Elementary school teacher. The minor Spanish however is a bit of an outlier, but the reason I’m getting it is twofold. One, lots of people speak Spanish in the world, so in a practical manner it makes sense. Second, I want to be able to speak, read and write in Spanish. This led me to my study abroad program in Mexico.

The program I’m involved with goes for 5 weeks in the summer in Querétaro, Mexico. Querétaro is a city 3 hours north of Mexico City and containing over 2,000,000 people. Besides the locales, the city, a UNESCO world heritage site, draws tourists from all over Mexico. This can be seen every day in the colorful buildings, the many plazas, cathedrals, and statues. You can visit the aqueduct which towers over the city since it was built in the 1720’s. Most of all, the people who live in the city embody its culture from the street carts selling crafts and clothes to kids walking to school in their uniforms, and the downtown plazas full of people and activity. I can’t overstate the importance of the plazas. They’re the center of life here as people come and go all day, waiting under the trees or simply lounging. Young kids play, teenagers play with a volleyball, while the bells from the churches ring out. They are simply the pulses of the city, each one unique, but somehow the same homey feeling.

However, that doesn’t really fully illustrate how different everyday life here is from being back in the United States. For instance, my normal school day is completely different from the very start. Breakfast is huge, my host mom usually gives me a full plate of fruit along with a sandwich or tacos. Very different from my normal bagel and banana that I try to grab running into class. Secondly, walking to class is very different. The sidewalks here are very narrow so everyone has to work together in the morning not to fall into the streets, which are all cobblestone. Going home is also very different because I take the bus, which is an experience in its own right. It only costs 8 pesos (about 60 cents) to ride the bus, but to even get on you have to flag it down from the stop. Even then it’s not a guarantee that the bus will stop right at the marked area, sometimes it just opens its doors right in paused traffic. From there though it’s like any other bus, in any other city, with people just trying to get from place to place. Then it’s time for lunch, which is also very different. Lunch here at about 3:00 p.m. is the largest meal of the day, about the size of dinner in the U.S. Thus, dinner here is small; a bowl of cereal or some small quesadillas or sometimes a small pastry with hot chocolate. While of these differences were a little overwhelming when I first arrived, they now seem all too normal and make me really sad to know this is going to be over far too soon.

To anyone thinking about going abroad, I promise it means more than you can imagine. I’ve grown so comfortable in this city that it almost feels surreal that I’m going to have to leave. Yes, you miss things from your life in the U.S., but that feeling goes away. Instead, you think of all of the things you’re going to miss when you return. I’m already starting to miss the delicious food and I haven’t even left yet. If you want to go abroad do it, because the place you go to will teach you more about yourself than you can ever learn at home.

Coming Back to the U.S.A.

We often look back at periods of our life as being particularly memorable. High school, getting ready to leave for college, and your first semester at college stand out as a few. What these all have in common is that they are huge lifestyle changes that shift one’s perspective. Study abroad is similar, but in a way, is different than any lifestyle change one has experienced before. My study abroad session was 5 weeks in Querétaro, Mexico studying Spanish. While much shorter than other people’s full semesters abroad I still found that upon returning I had experienced some big changes in my mentality.

I started to notice all of the things I found so essential in Mexico appeared in radically different forms back here in the United States. One large example was the bus. In Querétaro, the bus system is organized chaos; a mish-mash of routes weaving throughout the city stopping in both marked and unmarked areas where no one explains the rules, but everyone follows them any ways. I used it every day to get home from school for the largest meal of the day and grew to appreciate the rapid chaos. Mostly I appreciated the efficiency that it set out; always moving along to get me from place to place relatively quickly despite the heavy traffic. However, rejoining the public transportation here in the United States, I was immediately struck with how slow and unreliable it felt compared to what I had just experienced in Mexico. It was such a small everyday necessity that I had never really thought about and immediately recognized as different upon returning. I kept asking my friends if the bus had always been like this, that the system seemed better before I left, but they insisted it was the same. It’s not what one would typically expect, but it represents a fundamental change in viewpoint. I hadn’t expected to find the bus system in Mexico superior to the USA, but here I am still remarking over these types of details.

While the bus is not something radically life changing, it has highlighted the differences between the two countries that stand in stark contrast now. I’ve found I miss structural things about how my life operated in Mexico; whether that’s the food, the general mood of the people, or simply how things look. You carry a piece of that experience with you upon returning. I’m constantly referring to events or moments from my time abroad in passing moments. I watch Spanish in Netflix, specifically shows my host mom recommended. I try to find things that invoke the feelings I had being in the plazas every day or got from riding the bus. These are small things, but they are the most memorable to me. In these I see the most change as these are the things that grate most harshly with my daily life here in United States. But, they are also the things I treasure the most from going abroad, because they were the most authentic. In those moments, I felt like a local, even if only for a second, the goal I hoped to achieve before I left the city. It’s why I see the most difference between those small things and my life here in Oregon.

Overall, I miss Mexico. I love being back in the U.S.A. and everything here, but I miss Querétaro. I miss the people sitting in the plazas as school kids run in their uniforms to the various school building. I miss my host mom talking to the newscasters as we watch the news during meals. But mostly, I miss the energy the city and country gave me and I gave it. But, isn’t that what study abroad is about; going to some place and experiencing a particularly magical period of our life that shifts the way one views the world. I think it is.