A thrilling experience I encountered here in Florianopolis was the field trips. At least once... 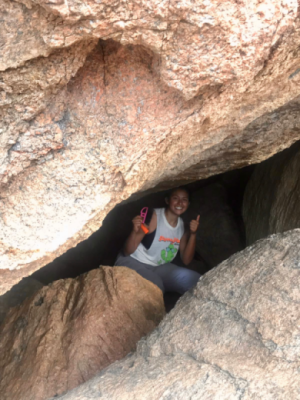 A thrilling experience I encountered here in Florianopolis was the field trips. At least once a week, depending on the weather, we would embark on these treks to various otter shelters in the southern part of the island. The top 5 places we would visit would be Saquinho, Lagoahina do Leste, Nafragados, Pantano do Sul and of course Lagoa do Peri.

Lagoahina is by far the most difficult trek consisting of a 2-hour hike along the mountainside to get to the shelter. We started at the project and walked through the town known as Armacao, then 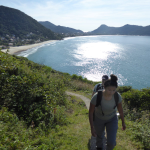 we crossed a river that acts as the ecological corridor that connects the ocean to Peri Lake. Locals are known to have seen otters and caiman in this river during their summer season. Once on the other side of the river we climbed along some seaside rocks to get to Matadero beach which is known for the balaighn whales from the end of July to October. We walked alongside the beach to the mountain’s edge where are real hike began. For about half an hour we climbed the steep trail on the mountain side. Once we were at the top we began to follow the trail alongside the mountain. The view of the ocean crashing repeatedly against the mountainside made this trek especially thrilling.

Part of our trail consisted of a climb up the steep mountainside full of vegetation, it was almost as if we were rock climbing but instead of rocks we had to hold onto exotic plant life. As we pursued 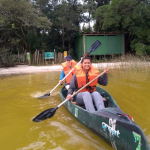 the trail, we witnessed a beautiful mother whale and her albino calf swimming towards our final destination. The last bit of the trail consisted of a breathtaking view overlooking the beach and the mountain across the way. Next to the beach was another ecological corridor, a lagoon, that is the namesake of the area. The water from the lagoon was pristine and we witnessed at least one capybara drinking from it. While walking to the otter shelter that was located on the opposite side of the beach, we were amazed to see penguins and turtles along the shore. Locals say the seclusion of this beach allowed for marine wildlife to rest here during their long journeys. It was a bit of a climb to get to the oceanside rocks that the otters seem to be found of and once we got there the research began.

One of the ongoing research studies at the otter project is the examination of otter presence intensity at the shelters on the island. This means that we are trying to determine which shelters are more often used by otters. We gather this information by checking the shelters for feces: fresh, fragmented, or intact. The thrilling part about this research is the opportunity to go inside their intricated shelters. They mostly use these shelters as latrines and are known for being nocturnal, so it is extremely rare to see an otter out in the wild. It’s amazing being apart of this ongoing 15 year research project knowing your contribution is important. 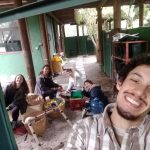 This thrilling trek taught me how vital it is to push yourself out of your comfort zone in order to make progress. If someone would have told me about this hike I would have stayed put but it wasn’t until finishing the day that I realized what my body is capable of. I was surprised and thrilled to know that I can actually spend hours hiking a steep mountainside and be okay at the end of the day. It’s human nature to want to stay within your zone of comfort but it’s extremely important to focus on your goals and what you want out of your internship and proceed to actively pursue it. When you’re feeling homesick its vital to remember why you’re there and the thrilling adventures that await you. When interacting across cultures, any form of trying to will be welcomed. Everyone appreciates someone who tries to connect with them and their culture. Whether through food, language, or cultural events the act of trying goes a long way.