Grace is studying abroad in South Korea where she experiences the great entertainment, food, and more.  She also is able to improve her confidence in speaking Korean.

For the first time in my life, I can say that I have lived and studied in another country. So far, it has been an amazing adventure. I have learned a lot about Korea, life, and myself. 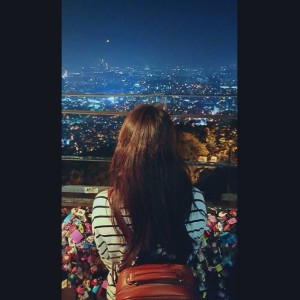 Right away, I was met with amazing and generous Korean hospitality. I met my extended family for the first time in 15 years. The last time I was in Korea, I was 5 years old. Although we were basically strangers, my aunts and uncles and cousins put so much effort into making me feel welcome and comfortable. For one week, I was treated to delicious food and got my own personal tour around Seoul’s most popular places. Although I spoke a good amount of Korean already, it was still hard to communicate perfectly with my family. There were times I would hesitate because I was not sure if I would be saying something wrong. But by the end of the week, I found myself more confident to make conversation.

For the most part, I did not have much culture shock. Since middle school, I have probably looked at a million photos of Seoul streets and cafes and watched a thousand Korean vlogs and travel tips on Youtube. When I first stepped foot around Seoul, I was not too shocked by what I saw. I was rather full of awe that I was actually here after so many years of dreaming about it. But of course, there were small things that I didn’t know and had to get used to. While walking in the streets or in the subway stations, it is completely normal to shoulder someone and not apologize or even throw an apologetic glance. Also, cars and motorbikes do not care about you. The phrase “look both ways before you cross” is not a precaution here but the difference between life and death. I experienced one of the most curious things in my Carving class. For the first four classes, we spent the entire time going from student to student talking about the most influential thoughts and experiences currently going on in our lives that was affecting our artwork. I summarized my story as a Korean-American inspiring me to make pieces about the cultures I am a part of in five minutes. Other students took almost thirty minutes each, going into very personal territory such as one girl’s fear of her mother dying because of her old age and another girl’s hatred of Korean culture. I later asked a Korean friend if this is normal. He said it is not common but it is normal to be very open and personal right away with classmates and coworkers.

One of my fondest memories since arriving in Korea was doing a temple stay. This involved travelling to the countryside and donning temple clothing. I woke up at 4 a.m. to participate in morning prayer and ate delicious vegan temple food. The best part was performing a tea ceremony with the head nun and hearing her stories and opinions that opened my eyes to Buddhism. I spent a rainy day relaxing at a 찜질방 (Korean-style sauna) and braved 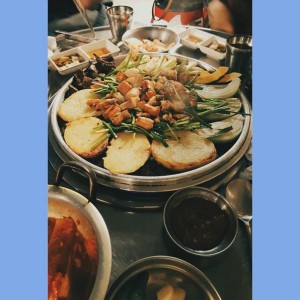 the public baths where you are fully naked amongst local Korean women. In the summer, I biked the Han River. In the fall I travelled to Nami Island, a famous spot for looking at the changing leaves. In the winter, I ice-skated in City Hall to K-Pop music.

Food is the one thing I know for sure I will miss when I go back to Oregon. It comes in so many different shapes and sizes and colors here. You can find it along the streets, in underground subway stations, and at the top of the tallest tower in Seoul. I found myself open to absolutely anything and everything. I swallowed a live, writhing octopus after it detached its suction cups from my tongue. In the warmer months, I cooled off with 빙수 (shaved ice) and its many amazing toppings like red bean, ice cream, and various fruits. I tried chicken feet, pig feet, intestines, and silkworm. I didn’t eat much of the food I knew I could get back at home.

I have met so many amazing people from all over the world here. My friends are from France, Germany, Belgium, Taiwan, Vietnam, China, the Netherlands, England, Tunisia, and Austria. I learned about so many intricate details about their cultures. Although we were all so different, we were connected by one thing: our love for Korea. Some friends came to Korea already knowing a lot about it. They were first hooked to Korean culture through K-Pop, which quickly moved on to different genres and other media. Others discovered its charm after landing. So many evenings were spent sharing the newest discovery about Korean culture or a random friendly encounter with a local. As for Korean friends, I have made a few. I was surprised at how hard it was to get to know them. I soon discovered how shy Koreans are of talking in English, especially to a foreigner. I thought that both my appearance and ability to speak pretty good Korean would make me more approachable. But I was still a foreigner in their eyes. The few Korean friends I did make all shared the love of travel. They had either already studied abroad or planned to study abroad in the future. These Koreans were much more open and not hesitant to talk in English. One of my best memories was comparing with two Koreans and my French friend the differences between our cultures. I learned that Koreans did not like meeting new people. So they often stuck with the friends they made in high school, especially since most people live in Seoul so they are still able to meet up after all these years. 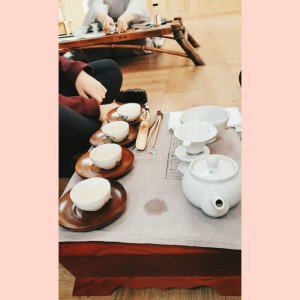 For next semester, I really want to put my energy into making more Korean friends. I think in this way, I will have a more authentic study abroad experience since I will be learning the culture from a Korean’s perspective. I joined clubs last semester, but I was not a very committed member. I plan to join more clubs and really be involved. I want to discover more organizations that bring Koreans and foreigners together, such as language exchanges. And of course, I want to keep discovering Korea. Although I had so many adventures already, there are still so many things I need to try. And there is so much more to learn.