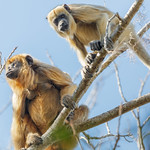 Nestled between Brazil and Argentina is one of the most biodiverse countries in the world—Paraguay.  Relatively off the beaten track, this country is home to habitats that host an impressive array of wildlife, many of which are only just beginning to be studied.  However, these habitats are fragile and need protection.  This host site aims to do just that in a sustainable way, by supporting scientific investigation and participating in community engagement efforts.  One of their goals is for interns’ scientific findings to eventually be published, thereby helping interns build their careers in the field of science while simultaneously bringing increased awareness and protection to the ecology of Paraguay.

Interns are primarily based out of the town of Pilar, with fieldwork conducted at field sites around the country.  Much research is in the Ñeembucú Wetlands, among other habitats.

Interns will choose the category of wildlife that they are most interested in studying, from among the following: bugs (insects, arachnids), reptiles, amphibians, primates, mammals, fish, birds.  Examples of each are provided in the “Job Description” section below as well as the photo album; keep in mind these lists and photos are not exhaustive.

Based in Paraguay, this small independent research NGO has hosted over 1,000 undergraduate and graduate interns from universities around the world.  Their mission is to conserve fragile habitats in Paraguay, namely the Ñeembucú Wetlands, and to inspire and motivate passionate students to pursue careers in environmental conservation.  The organization manages multiple research stations across Paraguay, runs a nation-wide environmental education program, and works with communities to promote conservation projects.

Interns contribute to the mission of this organization by helping them do far more research than they would otherwise be able to do.  Many research findings from past interns have succeeded in getting published, and in so doing, have brought increased awareness to the ecology and wildlife of Paraguay.

Interns contribute to and conduct research on topics of ecology and various wildlife species.  One of the goals of the host organization is for interns to participate in research that will eventually be published, thereby bringing increased awareness to the species and ecology of Paraguay.  The site will connect the intern to current projects and areas of study that fit their interests, experience, and skill set, and will support them in advance of arrival with regard to their scientific preparation. Interns should expect to be involved in collaborative and/or on-going research projects; in rare exceptions, highly qualified candidates who are staying for an extended internship may be approved to conduct their own research project.

There are seven categories of fauna that interns could potentially study: bugs (insects, arachnids), reptiles, amphibians, birds, primates, mammals, and fish.  Below are a few examples of animals in each category; this list is not exhaustive.

Illustrative examples of past research projects at this site have included:

Budgeting Note: Estimated costs are based on typical internship-related costs and a modest standard of living. Each intern’s costs will vary based on lifestyle choices (eating out vs. cooking, taking public transportation vs. taxis) and recreational spending (travelling on days off, hobbies, etc.).

* This rate is for 10 weeks in a shared room.  The price is incrementally higher for private rooms and for 11 or 12 week internships.

** Visa requirements and costs are subject to change, and vary by nationality and by route of arrival in-country

*** Fees vary based on medical history and insurance coverage

****Airport pick-up can be arranged for an additional cost.

Interns are provided with shared dorm-style accommodation at the site’s headquarters located in the city of Pilar. (Private rooms are available upon request but include an additional fee).  All common areas are co-ed; dorm rooms and bathrooms are not.  The house is equipped with Wi-Fi, hot showers, and running water.

The host site fees also cover three freshly prepared meals a day served family-style by an on-site cook, as well as unlimited amounts of tea, coffee, diluting juice, and of course ‘terere.’  The host organization is located in a small town so access to certain indulgences (chocolate, soda, etc.) are just a short walk away.

Check out more pictures of this site here.

This is a new IE3 Global internship opportunity.  Apply to be our first intern!