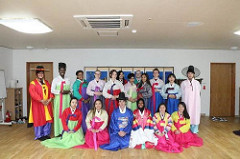 Support international education and cross-cultural development while learning about Korean culture through this dynamic internship with the Office of International Affairs at the University of Ulsan in South Korea. Native English speakers will support international exchange students, develop and organize activities and events, and assist with communications and other tasks within the office.

The University of Ulsan is one of the top ten universities in South Korea and provides a unique venue for collaboration between academia, industry, and the private and public sector. The Office of International Affairs and Education supports a wide variety of initiatives and interns will be involved in supporting incoming international students, development of activities, department marketing and communications, promotion of programs, and assisting with English language programs. Interns will also take part in and support the four week Ulsan International Program, a summer intensive program focused on introducing students to Korean society, culture, business, and language.

English-language internship (Korean is a plus) which requires strong communication skills and a high degree of maturity. Preference for interns available for the summer/fall terms (6 months) or for the calendar year (February – December, 11 months). Housing is included for all interns and those available for the academic year will also be reimbursed for international airfare.

The University of Ulsan is a private, four year institution established in 1970 by the founder of the Hyundai Group, Mr. Ju-yung Chung. UOU is home to more than 15,000 students and offers a wide variety of undergraduate degrees within 12 colleges, 29 different master's degrees, and doctorates within 19 areas of study. Additionally, the university has 15 research institutes, providing a link for cooperation between academia, industry, and the private and public sectors.

The International Affairs and Education Office at UOU is a small but dedicated team, supporting a variety of programs and initiatives on and off campus. UOU encourages international partnership and offers exchange, visiting, and dual degree programs each year. Each summer, the university also offers the Ulsan International Program, a four week immersion program designed to share Korean culture, society, business, and language with the next generation of global leaders.

Located on the southeast coast of the country, Ulsan is Korea's seventh largest city with a population of more than 1 million. Ulsan is an industrial powerhouse, home to the world's largest automobile assembly plant (Hyundai Motors), the world's largest shipyard (Hyundai Heavy Industries), and the world's second largest oil refinery (SK Energy). Ulsan has the highest GDP per capita in South Korea. Despite of its industrial zones, Ulsan is a lively metropolis and also well-connected to other major destinations, including: Busan (Korea's second largest city) is just 45 miles to the south, Gyeongju (ancient and historic city) is 30 minutes by car, Jeju Island is served by regular direct flights, Seoul is just 2.1 hours by high-speed train. Japan and China are easily accessible by regular flights and there is also a high-speed hydrofoil from Busan to Fukuoka, Japan.

The beautiful coastal location offers a variety of attractions including the Yeongnam Alps, Onggi Village (Korea's largest traditional folk village), a whale museum, the Ulsan Grand Park, Taehwagang River Grand Park and Bamboo Grove, and beaches. The local government has been committed to creating an eco-friendly city where development and preservation exist in harmony. Ulsan is a sister city with Portland, Oregon.

Interns will get a first-hand look at international education programming by supporting projects and activities of the university’s International Affairs Office (IAO). Tasks will be focused primarily around support of the Exchange Student Program, including student support, marketing/communications, event management, and administrative support. Students will be given a significant level of responsibility and will develop their communication and cross-cultural skills. Interns report to the Deputy General Manager of the International Affairs Office and will work closely with other IAO staff, interns, and RAs. Interns staying through the summer will also support the Ulsan International Program, a short-term study program during the month of July. UIP is a well-rounded cultural exchange program, consisting of classes and excursions in an effort to develop students’ knowledge of Korean culture, history, society, business, and language. During the spring and fall semesters, interns will assist with a variety of tasks, including:

- communicate with international exchange students before and after arrival to Korea, including arrival orientation
- coordinate arrival and local logistics (transportation, phones, bank accounts, class registration, immigration, health/hospital visits)
- serve as a Residential Assistant (RA) in the dormitories and work with the RA team
- support LATU (language tutoring club) activities including planning, supervision, reporting, and English tutoring
- serve as a mediator for student/student and student/professor issues

No compensation is provided, but accommodation and basic Korean language courses are provided free of charge. Academic year interns will also receive $1,000 reimbursement towards international airfare. Interns will participate in the Ulsan International Program (four weeks) free of charge. Some meals, transportation, and activities may also be provided at no additional cost.

Shared accommodation will be provided in dormitory on-campus. Interns should expect to share a dormitory room and bathroom with one other student of the same sex.

“During the summer I was a part of the UIP program as an intern. It was a very memorable experience as I was able to help put together events for the students and meet so many amazing people from around the world who all wanted to experience a new culture and to be a part of something new. After summer semester, I worked in the [international affairs] office every day from 9am to 6pm, helping international students and helping other coworkers with anything they need. I am also a RA in the dormitory and I still help plan events for the international students. I am also part of a program named LATU, which helps Korean students learn various languages through tutoring with the international students from all over the world. Working as a tutor and in the office has made me a multitalented person professionally.”

Interns will be provided with a computer in the office but should have their own device for personal use outside of work tasks. A high-quality camera is also helpful but not required. Interns should have at least one formal outfit for meetings and special events. Day to day office dress code is business/business casual (slacks or skirts, dress shirts).