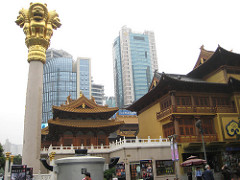 Interns will gain hands-on experience exploring international trade, development, policy, and commercial relationships, particularly between China and the U.S. Internships are based out of Shanghai, Beijing, Chengdu, Guangzhou, or Shenyang. This is a highly competitive internship with the U.S. Government and is only open to U.S. citizens.

The Foreign Commercial Service (FCS) Shanghai is the commercial section of the United States Consulate in Shanghai. It serves the East China consular district, which encompasses the city of Shanghai, as well as Jiangsu, Anhui, and Zhejiang provinces. East China is one of the most dynamic regions in the country and Shanghai serves as China’s financial and commercial center.

East China is an important region for the Commercial Service’s mission of promoting American exports. Shanghai, Zhejiang, and Jiangsu all rank among China’s top five locations for consumption of imports. Shanghai is also home to the Shanghai Free Trade Zone since 2015. FCS Shanghai’s Commercial Office assists American exporters with extensive expertise in many sectors, but especially electronics, aviation, pharmaceuticals, and automobiles.

Interns may apply to any of the commercial sections in China, located within the U.S. Embassy in Beijing and the U.S. Consulates in Shanghai, Guangzhou, Chengdu, and Shenyang. Each office serves a specific consular district within China.

The intern will work within the commercial section at an embassy or consulate in China. Tasks and responsibilities will vary depending on each posts’ needs, the intern’s qualifications, and current projects.

Potential activities may include:

Applicants with backgrounds in economics, business administration, law and related fields are encouraged to apply. Asian or Chinese studies are a plus.

The ideal candidate will have experience in the areas of business, trade, public relations, policy, or research. Strong communication skills are required and interns must be comfortable interacting cross-culturally and in a variety of environments.

Interns must be fluent in English and should have strong verbal and written communication skills. Priority is given to applicants with advanced knowledge and experience using Mandarin Chinese.

The internship is only open to current U.S. citizens. Applicants must submit to a background and credit check by the U.S. government. Successful applicants will also need to provide additional documentation to the U.S. Commercial Service China to be considered. A current list of documents required can be found on the U.S. Commercial Service China’s website.

The Commercial Service has strict application and notification deadlines, which may not correspond with IE3 Global’s typical timeline. Interns should prepare materials in advance of the deadlines and ensure that the notification date fits expectations.

Monthly expenses will vary depending on the intern’s location. The amounts listed above are representative of the average costs in Shanghai.

Interns are responsible for finding and arranging their own accommodations. Budget hotels are a convenient short-term option.

“My internship with the US Commercial Service provided me unique insight on the complexity of US China relations. By working for the government, I saw how US companies had to posture themselves to prepare for, and succeed in, the Chinese market. My time in China helped me grow and cultivate my previous knowledge of the Chinese government and political system. While working in the consulate, major historical events occurred, such as the amendment to the Chinese constitution on Presidential term limits, and two US government shutdowns. In my free time, I volunteered with three local advocacy groups, one focused on anti-domestic violence, another on bilingual discussion of topics affecting the queer community, and a bilingual discussion and fundraising group on trans topics and the trans pride celebration in Shanghai. I had some difficulties raising my voice and feeling like I belong here. Even though I doubted myself many times over, I still did my job, worked hard, and tried to find a way to give back to the community that support me. I value the experiences this internship provided me and the opportunity to grow as a stronger person.”