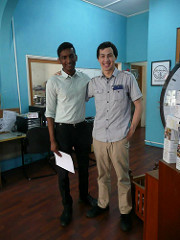 Tenaganita has been working to protect and promote human rights in Malaysia since 1991. The organization conducts research, provides legal aid services, awareness building activities, advocacy, and supports other organizations interested in the rights of women, migrants, and refugees in Malaysia and beyond.

Interns from a wide variety of academic backgrounds are encouraged to apply. Tenaganita is a leader in migration and domestic worker issues, providing interns a first-hand look and hands-on experience with some of the most pressing issues facing Malaysia and Southeast Asia today.

Tenaganita is a Malaysian NGO based near Kuala Lumpur that protects and promotes the rights of women, migrants, and refugees. They envision a just, free, and democratic society where all are equal, able to live with dignity and the same rights. Tenaganita provides legal aid services, awareness building to various stakeholders, advocacy, research, and support to other organizations.

The organization was founded in 1991, born out of the struggles of women workers in the plantations and industrial sectors to gain their rights as workers; for decent wages, a decent living, and to stop discrimination and gender based violence. Since then, Tenaganita’s scope has grown in leaps and bounds and today they work to address issues of exploitation, discrimination, unequal treatment, and violence - not just against women, but also refugees and migrant workers.

For more information about Tenaganita’s current work and issues in Malaysia, visit them on Facebook.

There are a variety of ways interns can support Tenaganita’s programs and each internship will be somewhat guided by each intern’s interest. Interns will learn about and be exposed to issues such as human trafficking, migration, refugee-seekers, business accountability and responsibility in the area of Sustainable Palm Oil, basic human rights, and women’s issues. As Tenaganita is the foremost organization in Malaysia on these subjects, the intern will get a firsthand insight into the issues and efforts being undertaken to address them. Some examples of tasks and projects in current areas of interest are below. This is just a small sampling of the type of work an intern may support.

Publications and Resources: development of materials such as training manuals, toolkits, presentations, reports, etc. Interns will support program areas and develop materials pertaining to the current issues being worked on at Tenaganita. Interns may undertake research, writing, editing, and design tasks. Research may be office or field-based, depending on the project.

Website and Social Media: preparation of content and content management with the aim of increasing awareness of the current issues at hand. Depending on experience level, interns may propose and create new materials (knowledge of relevant software is required).

Event Planning: assist in the planning and organization of events such as conferences, workshops, forums, training sessions, etc.

Qualified interns are eligible for a monthly stipend of 500 MYR (approximately $130).

Accommodation can be arranged by Tenaganita (typically a shared apartment near the office in Selangor), or interns may arrange their own housing (recommended if interns with to live in Kuala Lumpur). All housing costs are the responsibility of the intern. Private apartments may also be possible, although will be more expensive. Rental contracts are usually for full months, regardless of move-in/out dates.

“Tenaganita and Malaysia have taught me and showed me many beautiful and hardships I wouldn’t be able to see if I wasn’t here. After completing proposals, going on a few rescue missions, and doing investigative work, I’m able to understand Tenaganita’s hardships and its willingness to continue working with their limited funds. From traveling to many parts of KL – Puchong, Bukit Bintang, Petaling Jaya, Selangor, Putrajaya, Cyberjaya, Subang, etc., I’m able to see different sides of KL. Festivals such as Thaipusam and Chinese New Year were immersive experiences that let me understand the culture a little more. Outreach programs such as COBEM Sakinchan and MSF medical mobile clinics helped me develop an understanding of Tenaganita beyond its office. The constant challenge is to do more than I can offer because Tenaganita is a wonderful experience and cause. I’ve learned to be patient, stoic, and calm when situations get tense and understand that it is a choice to react to uncomfortable situations. The most important things I got out of this internship were the relationships I’ve built, the memories I’ve made, and the inspiration I’ve gained.”

“Working as a member on the collaborative Tenaganita team, I learned not only about the work that the NGO does and the social justice-oriented causes that the NGO addresses, but also about many current issues that Malaysia, ASEAN, and the world are facing.  Working with various team members on multiple projects allowed me the opportunity to work with refugees, migrant workers, plantation workers, and trafficking victims. I was also given the opportunity to collaborate with Malaysia Airlines, working on an initiative to intervene on behalf on trafficking victims and train employees to identify trafficking victims and traffickers.  As is true for most international work, there are cultural barriers that can cause confusion and make certain tasks and aspects of communication difficult, the cultural differences made my experience much richer, as those differences provide important opportunities for growth and learning.”

“Prior to this internship, I had considered working for a nonprofit organization; however, I didn't fully understand what that would mean on a day to day basis. After having completed a 6-month internship with Tenaganita, I have a better understanding of the workings of an NGO. I think it is important for interns to make note of their initial observations while still bearing in mind that they are neither experts nor are they fully aware of cultural biases. After becoming more familiar with the internal workings of the organization, I started presenting some of my observations along with solutions both in small group meetings and in our larger group discussions. My supervisor and the directors of the organization acknowledged my ideas to make some internal operations more efficient and they gave me the space to make changes. The organization noticed that I took initiative when I saw fit and I truly believe that is when they gave me more respect and saw me as an asset to the organization. Equally as important, I think it is important to view the organization as an asset to you and give those affiliated with the organization your utmost respect. Never lose focus of your objective at the organization. My objective was to develop practical experience, to understand the internal workings of an NGO, and to present my ideas in a way that is culturally respectful and can be continued even after I have completed the internship.”

“One of the projects I worked on was research for a joint project between Tenaganita and the World Wildlife Foundation. The intent of the research project was to assess, first and foremost, the health situation of deep sea fishermen in Malaysia; particularly with regards to HIV/AIDS prevalence among the fishermen, which is a severely at-risk population due to widespread reports of coerced drug use on their vessels. Of course, it also encompassed many other factors, including the citizenship status of the workers, payment, labor standards, possibility of slavery and/or abuse of the workers, etc. This consisted of two phases of fieldwork: one in which our presence as an NGO capable of assisting them when necessary was cemented, and a second one in which we interviewed, qualitatively and quantitatively, the persons via the contacts we made previously in order to elevate the issues they faced.”

“Nonprofit service and community engagement prepared me to use an asset-based approach to interact with the people that Tenaganita serves. My professor helped me to plan art projects at the shelter that are respectful of the strengths and talents that the women have instead of imposing a power dynamic on our relationship by implying that I have expert knowledge. Policy research helped me to understand the qualitative research that Tenaganita is currently involved in with JHU. With a basic understanding of research principles, I have been able to give input about potential biases, but most importantly because of the course material I am able to understand the process of gathering data for research. Policy analysis and classes regarding state and local government taught me to consider the perspective of all stakeholders and analyze policies that are in place. This has been especially helpful in developing a briefing kit for parliamentarians and creating content on social media sites. Through the course material in nonprofit leadership I have learned to identify culture, norms, practices, and heroes of the organization. I have used these observations to begin to understand motivates and sustains staff and volunteers.”

“During this internship, at times I found myself asking “why” to a lot of the international issues that come up through the work we did at the office. I asked why to how a government or even a group of people can be this way, not enforcing laws and letting these problems occur. You want to solve the source of the problem, but the source is usually government issues that are out of our control. So you just have to continuously deal with the output of the problem, which has been giving resources to and helping abused domestic workers. My idea of going to law school has progressed to the idea of law school with an attached master’s program in International Relations, as I am interested in pursuing the non-profit field or policy. I want to directly work with the people that need my help, but through this internship I have also seen how much policy and laws influence people’s lives and ultimately have the power.”

“Working with this NGO I have learned a lot about social work, and what it actually means to be a social worker. I did a few informal interviews with some of my co-workers and learned so much about what it takes to contribute your time and energy working to better your community. By working in the Burmese communities, I have been exposed to ways in which not only I, but people at home can help migrants (documented or undocumented) in the states. I still believe that studying laws and being politically informed is something that I really find valuable and necessary for change to happen in our communities. But being here at Tenaganita has taught me that so much change happens on the ground level. The social workers at Tenaganita are the ones who are extremely involved and the ones that work directly with the people and understand the situation from the bottom up. I have learned that having a closer relationship with the people you are working with and working directly with them is more rewarding and even more valuable than learning the laws and going to court.”