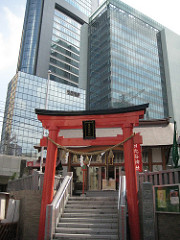 Our Planet TV is an alternative non-profit webcast station based out of Tokyo, Japan, working to raise public awareness of social responsibility initiatives and foster partnerships within media. This unique video and web journalism internship offers students a chance to work directly on current projects, suggest their own ideas, and create independent projects. In addition to film planning and production, interns will also help support with events, outreach, translation, website and general communications, research, and workshops.

Our Planet TV (OPTV) is an alternative media non-profit webcast station based in Tokyo, Japan. It was founded by a group of producers, video journalists, and other media professionals who questioned the way mainstream media covered 9/11 and the events that followed. It was formally incorporated as a non-profit entity in April 2005 and has no religious or political affiliations. OPTV is run by a small but dedicated team. A full-time staff of just a few individuals work with volunteers and interns (mostly from Japanese universities) to identify, track, document, and share videos.

OPTV aims to create space for independent video and web journalism on social and community issues. Through production, webcasting, and training initiatives, OPTV strives to ensure public access to media and a reflection of diverse views and opinions. They produce original programs about social issues, the environment, human rights, and education with diverse perspectives. OPTV often focuses on topics or events that may be accidentally or purposefully passed over by mainstream media, and encourages non-profit and socially responsible initiatives. They foster partnerships by coordinating joint media projects such as video documentaries and provide media training through workshops to individuals and organizations engaged in social causes. More information about current events can be found on OPTV’s Facebook and examples of their projects can be found here.

Interns will typically work directly on projects in coordination with OPTV staff. Interns are expected to participate in Our Planet TV’s video documentary planning and production projects. Our Planet TV hopes to gain various perspectives from individuals with diverse backgrounds, including those from the international community. Interns are encouraged to share ideas and opinions that may lead to more effective and creative journalism. OPTV and its interns may be able to create the change that traditional media cannot.

Interns may assist with the following (not all activities/events will be available every term):

These are team projects including other student interns and volunteers, most of whom are Japanese. Possible roles include reporter/interviewer, camera operation, and editing.

Interns are encouraged to independently plan and produce their own program for webcasting during the course of the internship. Opportunities to learn and improve production skills will be provided through OPTV’s regular workshops.

OPTV’s current audience is predominantly Japanese, but they would like to expand their network by enhancing English language materials and increasing participation in production work. Interns are encouraged to develop contacts to help OPTV expand its audience.

Interns can help translate narratives of OPTV’s existing work into English (or other languages as applicable). Work will be supervised by a professional. Print and website materials can also be drafted and translated.

Interns may have the opportunity to write a paper on alternative/grassroots media (perhaps a comparison of alternative media in the US and Japan) to be presented at the end of their internship.

Interns may support and take part in regular, hands-on workshops.

The ideal candidate will have experience with video or web journalism, and an understanding of Japanese history, current events, and culture. Strong communication skills and proficiency with Microsoft Office are required. Web and coding skills will be a plus, as will knowledge of Adobe Illustrator and Premier. Interns should be interested in non-profit organizations and alternative media trends.

Interns will be asked to join events that often take place on weekends. Dress: Business casual.

Interns arrange their own housing, with assistance and recommendations from a local contact. Interns have the option to stay in shared houses, apartments, or dormitories.

- Fluency in Japanese
- Background in communications, media, or journalism
- Passion for social issues and all things Japan