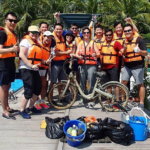 More photos of this internship may be found here. Photo courtesy of Waterways Watch Society.

Join an award-winning nonprofit in downtown Singapore working to bring people together and inspire environmental stewardship. Waterways Watch Society has been running educational programs, regular cleanup activities, and outreach efforts throughout Singapore since 1999. Visitors of all ages are encouraged to conserve, value, and enjoy Singapore’s water resources.

Interns will help organize and lead outdoor educational programs. This is not a desk-job! Interns will regularly be outdoors on foot, bike, or kayak with groups of children and adults. Opportunities also exist to support administration, marketing, communications, and program development.

Waterways Watch Society (WWS) is a non-profit organization in Singapore bringing people together to inspire environmental stewardship. Since 1998, the organization has run a variety of outdoor educational programs for visitors of all ages, focused on discovery and clean-up activities. For their public outreach efforts, WWS was awarded the inaugural Presidential Environment Award in 2006, and both the PUB Watermark Honorary award and NEA EcoFriend Award in 2007. In 2013, WWS qualified to be an Institution of Public Character, a prestigious status in Singapore for charities. In 2014, the founder Mr. Eugene Heng, received the Presidential Environment Award (in an individual capacity).

Interns are invited to join WWS to help plan, deliver, and design outdoor educational programs. Interns will be directly advocating for and supporting conservation efforts and environmental education in Singapore. Much of this internship will involve working with groups outdoors!

Interns at WWS will gain valuable experience in the fields of conservation and stewardship, including:

Interns with WWS will work Monday through Friday from approximately 11am – 7pm. Volunteering is the heart and soul of WWS, and interns are expected to support/join weekend volunteer activities at least once per month (minimum of three activities for a single term internship).

This internship is open to students from all majors. Coursework in conservation, outdoor education, or environmental studies is beneficial.

Interns must be flexible, eager to learn, and love the outdoors.  Prior experience in outdoor education, recreation, conservation, or youth programs is preferred.

This is an English language internship.

Much of this internship will take place outdoors in hot and humid environments. Interns should be comfortable standing and walking for extended periods. Experience riding bikes or kayaking is preferred.

Budgeting Note: Estimated costs are based on typical internship-related costs and a modest standard of living. Each intern’s costs will vary based on lifestyle choices (eating out vs. cooking, taking public transportation vs. taxis) and recreational spending (travelling on days off, hobbies, etc).

Interns are responsible for finding and arranging their own accommodations. Singapore has strict rules regarding short-term rentals for foreigners (less than three months), so interns should plan ahead to arrange suitable accommodations.

This is a new internship opportunity for IE3 Global students as of 2019. Check back in the future for more information from our interns.

- Must love the outdoors!
- Background in conservation, outdoor education, or working with kids
- Self-motivated with easy-going attitude, able to work with all ages