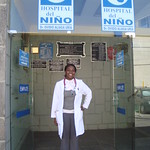 Interns in Bolivia will complete rotations in a variety of clinical and non-profit care facilities throughout La Paz and Tarija. Gain experience in working with largely indigenous populations in resource poor settings and understand the socioeconomic and cultural barriers they face in accessing services for their children.

Interns start out in Bolivia’s capital, La Paz, a modern cosmopolitan city in the Andean highlands that continues to confront inequities between social classes and ethnic groups. They take part in rotations at the largest pediatric hospital in the country, recognized as a major research hospital. Possible rotations with local physicians, residents, and medical students may include obstetrics, oncology, inpatient, infectious disease, and nephrology. In addition to clinical rotations, participants can choose to volunteer with local non-governmental organizations that cater to the needs of underprivileged children and families.

For approximately five weeks, participants will be based in the small city of Tarija, located in southern Bolivia near the border with Argentina. Participants will focus on primary care, public health outreach, rural health and prevention efforts in surrounding communities. Rotations may include public primary health clinics in urban and rural areas. Interns will also learn about Chagas disease, an endemic vector-borne illness that is a major public threat in Latin America. At a local clinic dedicated only to that disease, participants will look at the clinical manifestations and epidemiology of the disease as well as the public health efforts to detect and prevent it.  Interns will return to La Paz to conclude their internship.

This program includes 75 hours of Spanish classes in La Paz.

Interns are provided with opportunities to learn about global health while imbedded in the existing health systems and social services sectors alongside local community members and champions. This internship seeks to develop students’ broad-based understanding of the interplays between disease processes, social circumstances, poverty, resiliency, geopolitical realities, historical contexts, culture, and the complexities of health and wellness. Our partner company’s expertise is in “preserving the authenticity of the community’s expertise and presenting ‘real-life’ global health, while nesting programs in gold-standard educational pedagogies and safety standards”.

Thousands of students and medical professionals have taken part in their unique programs, which foster reciprocal partnerships and empowerment in local communities. Internships are open to all students with an interest in health in an international context and is especially ideal for pre-med, pre-nursing, public health, and global health students.

Our partner company in Bolivia is a global health ethics leader; as such, their programs uphold strict standards and comply with all local laws.  This program is not an episodic volunteer experience, and is not designed to provide service to those who would otherwise not have healthcare.  Therefore, the internship experience will be predominantly observational and interns should be aware that they are not to be providing direct healthcare to patients. The learning objectives for this internship, as outlined by our partner company, are:

Bolivia has the largest proportion of indigenous people in Latin America, and is also one of the poorest countries in the region.  This program provides interns an opportunity to compare and contrast healthcare between urban and rural locations, with a sub-focus on pediatrics and family medicine, while further developing their Spanish language skills.  Interns will begin and conclude their internship in La Paz, spending a total of approximately five to six weeks in La Paz and four to five weeks in Tarija.

In La Paz, interns will attend language classes and take part in clinical rotations primarily focused on serving children and families. Interns on this internship program will observe healthcare in a variety of settings and see or participate in public health work addressing other aspects of poverty as well.  Examples of possible rotation settings include hospitals (public and private), primary healthcare centers and clinics, centers for children with disabilities, public health organizations.

In remote town of Tarija in southern Bolivia, interns on this program will witness firsthand the cultural and socioeconomic barriers patients face in accessing healthcare services in this region.  The state of Tarija is unique in that it offers universal health insurance for all its inhabitants. This has created an enormous demand which at times cannot be met because of the lack of healthcare personnel and equipment. Interns will also have the opportunity to learn about the pathologies that are prevalent in Southern Bolivia but not commonly seen in North America, including parasitosis, tuberculosis, and chagas.  Interns may also gain exposure to specialties such as pediatrics, obstetrics and gynecology, internal medicine, surgery, anesthesiology, oncology, epidemiology and entomology.  Examples of possible rotation settings include clinics, hospitals (may include an intensive neonatal care unit), chagas clinic, and NGOs.

Activities and Tasks: This is an observation-based experience (see “About the Organization”).  Much of interns’ time will be spent shadowing physicians and healthcare providers as they work with patients during routine exams, taking medical histories, and performing procedures and surgeries.  Interns will observe patient-physician interactions, and may assist with note-taking as their language skills allow.  They may also be asked to assist with fetching and preparing supplies, and may participate in community outreach initiatives.  As time and circumstances permit, interns may have the opportunity to ask questions of medical providers and patients.

NOTE: All rotations are subject to change depending on availability and local conditions.

Spanish classes:  75 hours of Spanish language classes are built into this program, and are provided by a local language school in La Paz.  Depending on the number of participants and their language proficiency levels, students may be placed into small groups or one-on-one with a language instructor.

Budgeting Note:   Estimated costs are based on typical internship-related costs and a modest standard of living.  Each intern’s costs will vary based on lifestyle choices (eating out vs. cooking or eating provided meals, taking taxis vs. walking or taking the bus) and recreational spending (travelling on days off, expensive hobbies, etc.).

In both La Paz and Tarija, interns stay with homestay families.  Homestays are generally middle class and live in downtown areas. Homestay families are located near one another, allowing participants to walk to language classes.  There are many shops, restaurants, and cafes in the area.  Interns may be placed in a homestay with other participants and may share a room.  Accommodation includes two meals a day.

Interns are responsible for their own transportation in the city. Advice and tips on travelling locally will be provided at the welcome orientation.

Check out pictures from this internship.